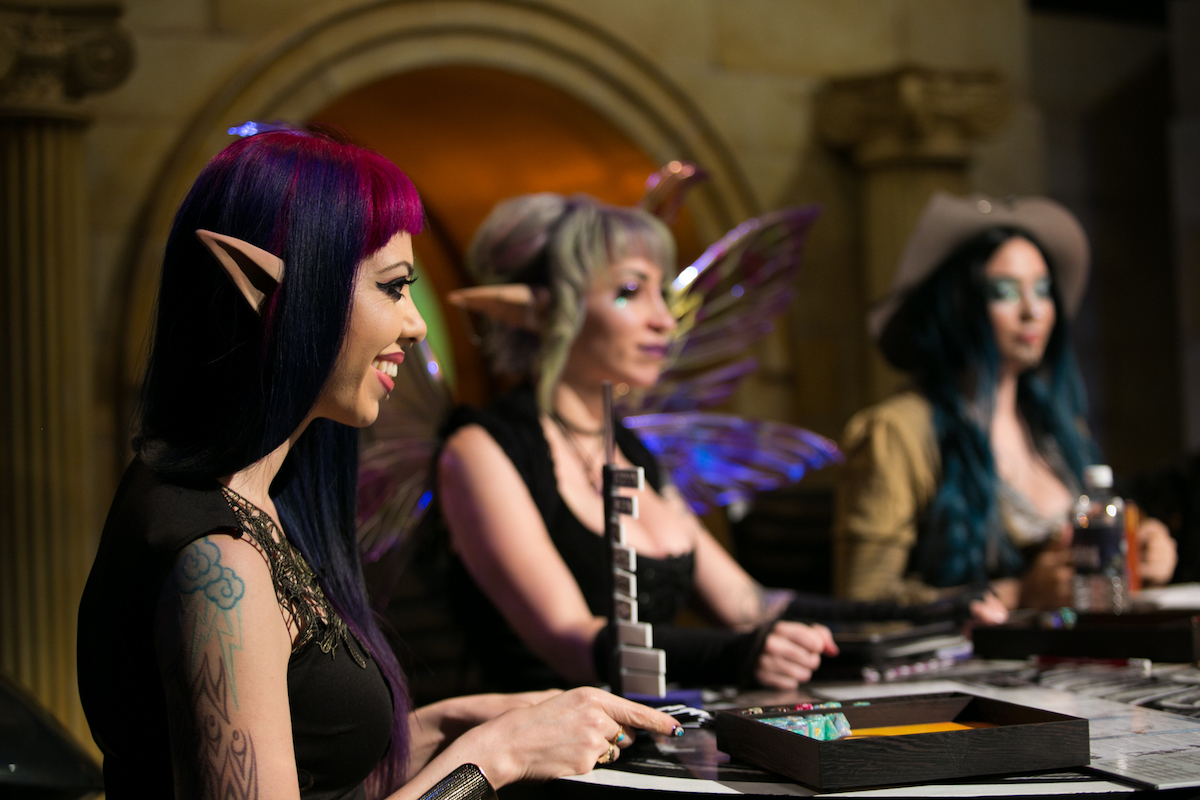 Sirens of the Realms via Tyler Curtis/ @tyliner

Earlier this year, I was lucky enough to visit with the staff of Wizards of the Coast about the incredible success of Dungeons and Dragons and just how much of that has to do with 1. The unprecedented number of women both playing and working on the game behind the scenes, and 2. The popularity of streaming the game on Twitch and other platforms. I was curious, though, about the intersection of those two elements: the experiences of those women playing D&D on Twitch and Youtube, exposing themselves to not just the gatekeeping trolls you might find at your local game store, but the toxicity of the entire internet.

This summer, I was able to attend The Stream of Many Eyes in Los Angeles, a three-day D&D livestream extravaganza. I took the opportunity to talk to the women there about what it’s like to play the game they love for an audience of strangers.

Nearly all of the women I spoke to said there was little difference between playing at home or in a game store and in a streaming setting. When streaming, they may put a bit more effort into their makeup or outfits, and think more about posture or up the drama of their roleplaying, but when describing the experience of playing in front of an online audience, a fear of criticism or trolling is not on their minds. 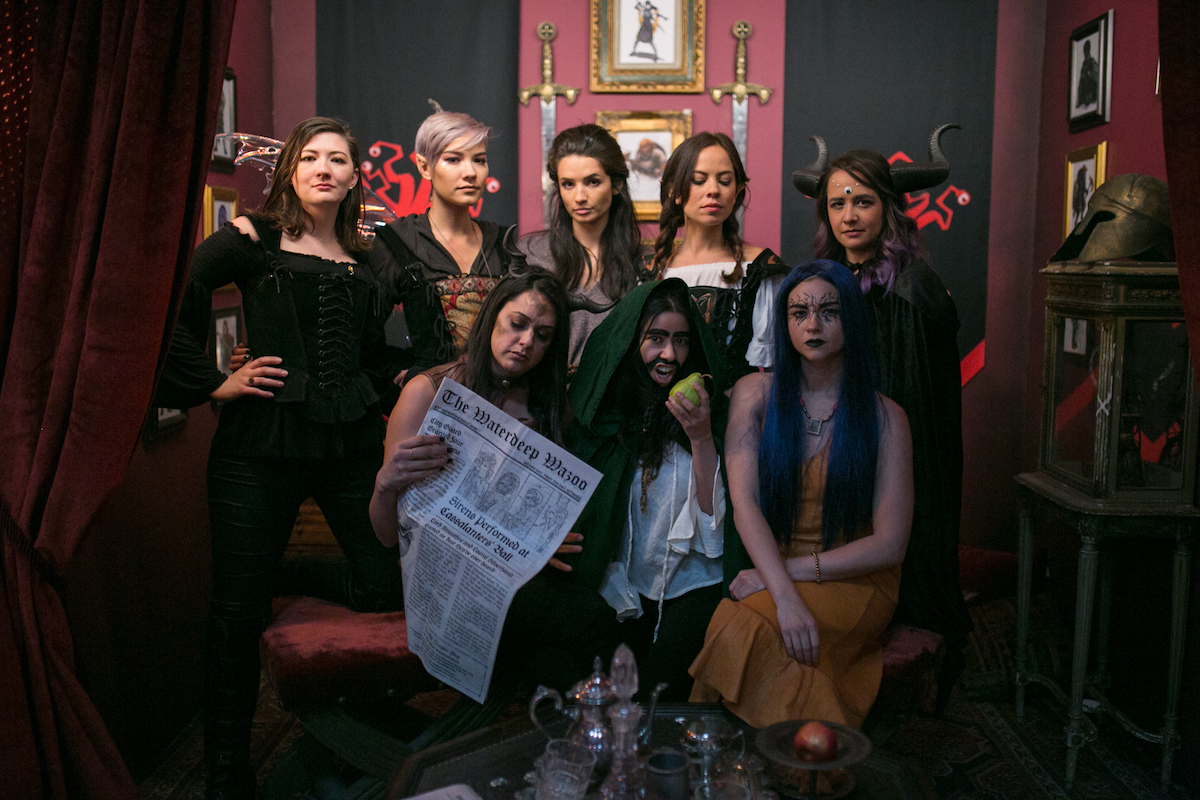 That’s not to say that they haven’t experienced trolls and gatekeepers aplenty. Some viewers are still surprised to see any female players, let alone a D&D group made entirely of women, like the LA-based Girls Guts Glory. There are still some people who are surprised women can have their own show, and feel the need to speculate publically over how that happened–if they’re the wives or girlfriends of gamers or developers, or even models hired by Wizards of the Coast, something group member Erika Fermina calls “a load of nonsense.”

The women I met all spoke of the positive, welcoming spaces in the larger D&D communities. But those spaces largely exist because women chose to hunker down and carve them out for themselves.

Anna Prosser Robinson, who was the host of the Stream of Many Eyes, works as a lead producer at Twitch Studios and has a long history in esports, so she’s no stranger to internet toxicity. She’s also a co-founder of the group Misscliks, originally formed to increase women’s visibility in areas where we were underrepresented.

“We wanted to do more things showing women’s faces doing things that you wouldn’t normally see women’s faces doing online,” Robinson tells me. “And told ourselves that–because every time we played, someone would come into chat and be like [extremely male online voice] “What, girls play Dungeons & Dragons?”–and we kind of said that as soon as that stops happening, then we’ll know that we’ve achieved our goal, and we just wanted to demystify the idea of women doing things that people would still kind of see as abnormal.”

In Robinson’s eyes, that makes Misscliks almost an “outdated idea at this point.” Not that some men aren’t still baffled by the idea of women playing D&D, but that it happens far less often. Back when they formed Misscliks, Robinson says, “I think I could count the women professionals I knew in esports on two hands. And so we need a pace where we could come and someone could say, ‘Hey, I need you here, I appreciate you here.’”

#Wafflecrew is live now, together at the table for the first time on www.twitch.tv/dnd 😍😍😍

She and her fellow Misscliks all had times when they asked themselves why they were doing this, putting themselves out there for viewers to criticize. But, she says, the sense of community they found among each other meant they could “lock arms around the D&D table and make each other feel wanted.”

Now, though, so many more women are “coming out of the basement,” as she calls it, and as more women put their faces out there as players in public spaces–be it on Twitch or in game stores–their visibility inherently encourages other women to either take up the game in the first place or to become more public and vocal in their playing. It also creates less of a space for those angry male players to try to claim their entitlement.

I want to go back to Waterdeep! What an incredible event! And off the table game was really amazing and boundary pushing! A different kind of fear sets in and overcoming that was beautiful. The players and DM made it better than I dreamed! #dnd #somednd #vlahnya #bard #wizard #collegeofwhispers

The women I spoke to discussed the changes they’ve seen in the D&D community and how women are feeling so much more welcome, largely because they are carving out these spaces for themselves and planting their own flags in this gaming space. But toxicity does still exist, and it’s a general rule of the internet that whatever toxicity exists in person is magnified online. I was surprised, then, when every woman I spoke to that plays D&D for internet audiences said that the opposite was true in their communities.

Some of the community’s unique dedication to inclusivity is due to the nature of D&D itself. As Phoenix notes, it’s a very different experience than what you find around other games–especially video games–where the PVP setup encourages a mentality of “You vs. Something Else.”

There, she says, “You’re working with the console, you’re playing a video game, you’re out to defeat a thing to get a thing. It’s a very singular hero style.” Tabletop play, meanwhile, is all about “collective, community, cooperative roleplay.” That community is especially geared toward being uplifting and supportive. Within the gameplay itself, things generally work out better when characters stick together and that, Phoenix says, translates to to the sense of camaraderie between players.

The online space that the D&D community has carved out for itself is also uniquely dedicated to self-policing. Nearly every woman in that sphere that I spoke with mentioned this, and I witnessed it myself during the Stream of Many Eyes. Watching the sidebar chat happening during the games, there were certainly the types of toxic comments you’d expect: comments on women’s appearances (both negative as well as inappropriate, creepy “compliments”), generalizations about women as players (and suppositions about how their appearances somehow inform their gameplay), and all the other things you don’t see in the chats on all-male games.

#CORNEAJUICE!!!! Catch up on all the #DeathCurse episodes through the link in our bio, and don’t forget to tune in this Thursday for the final episode, plus a Q&A with @go_nino and @sujataday! 2pm PST on @dndwizards’ #Twitch channel ⚔️🔮⛏🏹

But by and large, the community weeded out the most egregious toxic gatekeeping and harassment and then some. Mods are on hand to delete and ban, but the community itself also lets other commenters know what is not considered acceptable.

Girls Guts Glory’s Kimberly Hidalgo tells me, “When we first started, we had more hate, but now we have such a wonderful fan base and great moderators! The moment someone says anything negative, our fans immediately come to our defense.”

Robinson credits that lack of gatekeeping and general jerkery to the ways in which the community was first formed. “We’re lucky in that our community grew so organically from people who were so committed to those ideas of inclusion and kindness that now our community polices for it themselves,” she says. “And the role models that you see here, these are all people that will take those stands.”

“There are still places where people will go to a game store and feel like they can’t be included when they’re playing D&D or people will encounter in-game situations that make them feel uncomfortable,” Phoenix says. “That happens a lot and we still see that a lot. But the online community is such a safe haven for a lot of people that are trying to find their brand of game and their way to participate, because some people don’t even feel comfortable playing, they just want to be part of all this and that’s enough. And being told that that’s enough and that you belong because of that is important.” 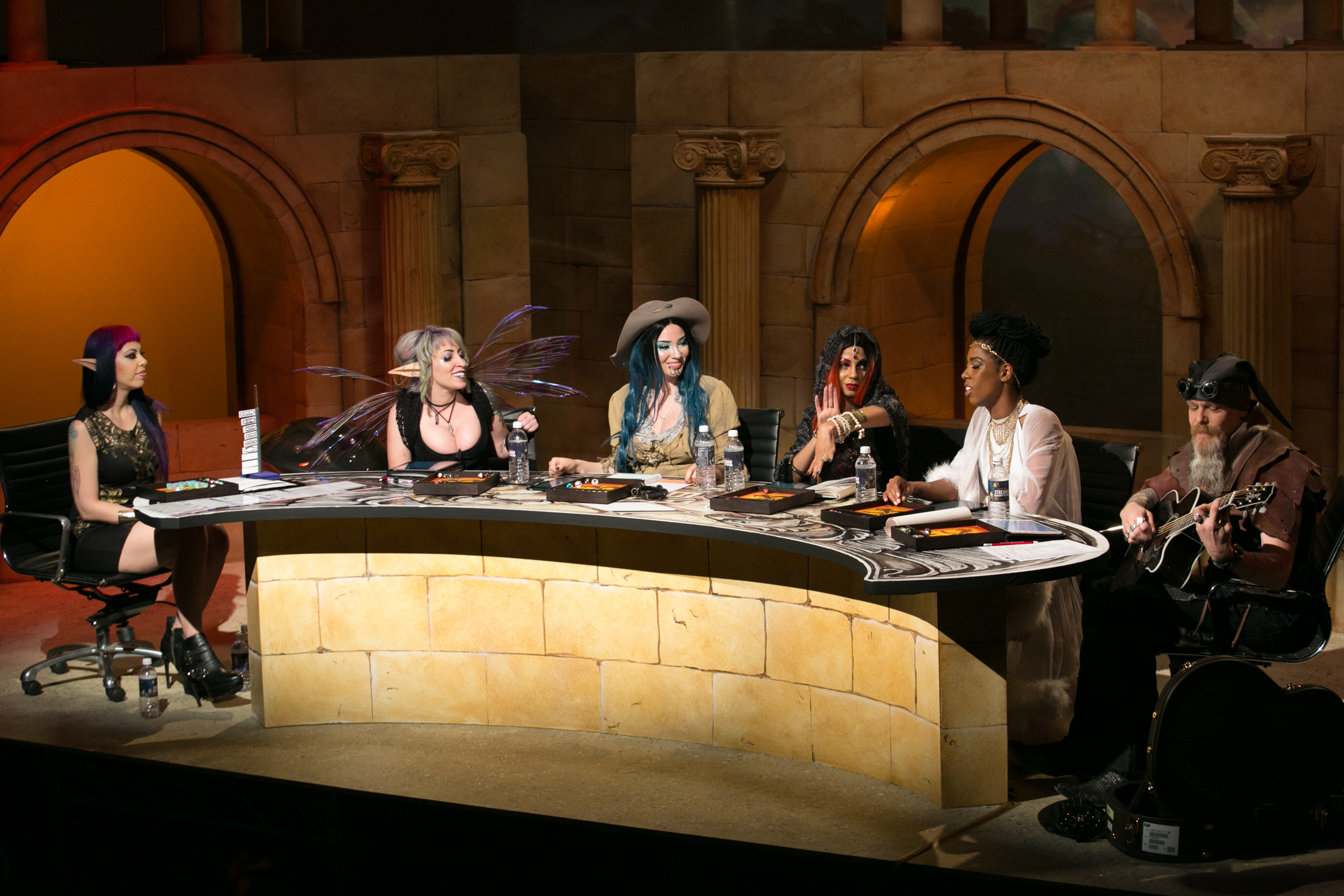 Sirens of the Realms via Tyler Curtis/ @tyliner

As for how these women do deal with the harassment and gatekeeping that still comes their way, they pretty much all adopt a “don’t let it get to me” stance. Satine Phoenix thinks everyone should just be in therapy, and then maybe the trolls wouldn’t need to direct their angst at strangers on the internet. (Heartily agree.)

Robinson has a “hold my dice” mentality when it comes to seeing gatekeeping in her online communities. She sees that toxic behavior and says her immediate reaction is to become actively protective. It may not hurt her feelings, she says, “because I feel really secure about how I play and it’s fine, but I don’t want the people that I represent seeing what you just said and thinking they can’t be accepted.” Amazingly, she’s had really positive experiences when she confronts that behavior head-on.

“I expected them to come back at me because that’s what happens,” she says. “But they were like, ‘Thank you for so much for taking the time to think about your response and help me understand how what I said could be exclusionary. I’m gonna really consider that and do better next time.’” Basically, the Internet Dream.

That ability to keep the hate at bay and not let it get to you may feel like an internet dream, but the women I spoke to seem to genuinely have it down. It helps that they have a great community, and supportive groups of fellow players, and that they all seem to truly love the game itself. Sujata Day of GGG says succinctly. “Our games are about hanging out and having fun with each other and our characters and that’s what we do!”