Hook Your Full Auto DIY Airsoft Gun to a DIY Flamethrower-Style Backpack, or Fire it By Hand 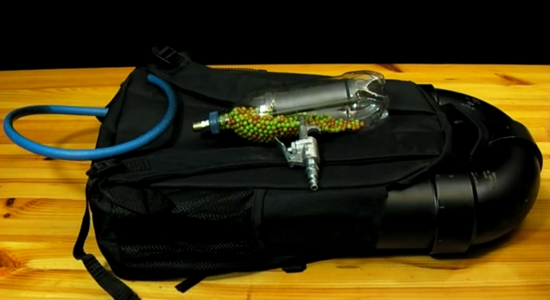 The idea of a cheap, DIY, fully automatic airsoft gun is pretty enthralling on its own, but what if I told you there was not only a $5 burst fire model you can fire by hand, but also a backpack mounted, flamethrower-style variant? Amateur pellet-gun armament just got real. Nighthawkinlight, mastermind behind the original soda bottle airsoft firearm now presents us with two modifications that can make it even cooler, in two distinct ways. A DIY airsoft gun upgrade tree, if you will.

First, there’s the model that increases portability and lowers the price at the cost of firing capacity. Basically, while the original model used an air compressor for power, the new model utilizes squeeze power. By removing the whole air compressor hookup and making the bottle’s sole whole the barrel, you can fire bursts just by giving the bottle a good squeeze, or maybe jumping on it. Granted, this makes it a burst fire device, but at a rough cost of about $4, you really can’t complain.

Second, if you want to go the route of increased sophistication, Nighthawkinlight has provided a tutorial on making your own backpack mounted pressure resevoir that you can take with you on the go. By using some PVC pipe and a few choice valves, you can make your own portable power source that won’t force you to remain tethered to a loud, heavy, air compressor. It’s worth noting that over-pressurizing a container can be pretty dangerous, so don’t push it. But barring catastrophe, you can have your own portable airsoft minigun.

This seems like the logical conclusion when it comes to DIY airsoft weaponry, but after seeing what Nighthawkinlight has already managed to whip up, I’m hoping to see something else crazy coming down the line. Maybe a DIY airsoft shotgun? A DIY airsoft rocket launcher? I’m open to anything really, just so long as it’s also unexpectedly awesome.