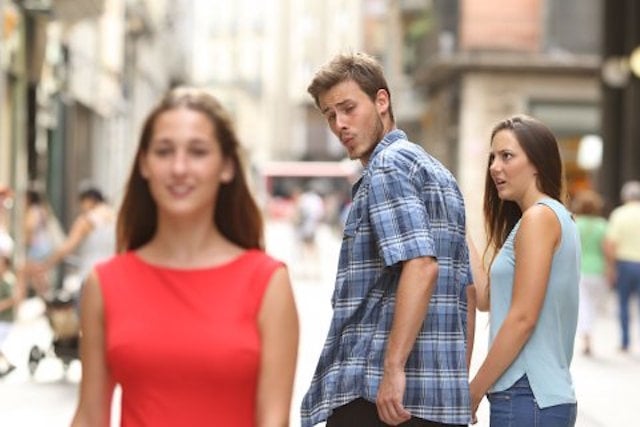 The “Distracted Boyfriend” stock photo meme swept the Internet recently, resulting in endless iterations (and a triumphant girl-power ending to the memestory). One artist gave the meme a clever literary twist and it is currently my favorite thing.

To catch you up if you missed the ascent of Distracted Boyfriend, the original image was a basic stock photo shot to exemplify, well, a man distracted by another woman on the street while ostensibly walking with his lady. Business Insider explains:

[Photographer Antonio] Guillem’s photo has been online, on the stock image site Shutterstock, for more than a year. In the past couple of weeks, it’s exploded across the web as a meme. The exaggerated facial expressions and soft focus makes it the prototypical stock image. And the social dynamic captured by Guillem and his models make the photo a metaphor for, well, pretty much anything if you put your mind to it — making it the perfect template for a meme.

The denizens of the Internet, as if their wont, ran with the image’s sudden popularity and template that seemed to lend itself to all sorts of situations.

Intrepid users even crafted a happier ending to the stock photo’s story based on other pictures featuring the same models:

THE CONCLUSION WEVE ALL BEEN WAITING FOR pic.twitter.com/48f6s5y9KG

Then I saw artist Binah Q., a.k.a. binary-bird‘s take on the meme on Tumblr and couldn’t stop laughing—fellow literary nerds, this one is for us. Binah graciously gave me permission to post their Distracted Hamlet Shakespearean meme: 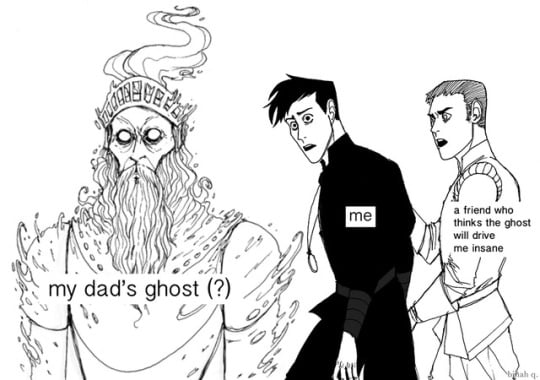 If you’re familiar with Hamlet, chances are that you’re morbidly grinning along with me right now. Not to unpack this over-much, but let’s have some English major-y fun. Beyond the evocative art style that ingeniously mirrors the original meme while substituting in the Ghost, a black-suited Hamlet, and his concerned bestie Horatio, this depiction also plays well with the themes of the play.

The question of whether the Ghost is real or a figment of Hamlet’s fevered imagination has long been the subject of debate; though other characters also see the Ghost, Hamlet is the only one it speaks to. It’s Hamlet’s interactions with his father’s spirit that send him into a spiral of outrageous behavior and familial tragedy. This ghostly mystery is imparted via “my dad’s ghost(?)” which first got me smiling.

Then there’s Horatio’s caption, “a friend who thinks the ghost will drive me insane.” Hamlet’s faithful friend stands by him through a lot but, y’know, first begins to worry when his friend wants to follow the Ghost:

What if it tempt you toward the flood, my lord,
Or to the dreadful summit of the cliff
That beetles o’er his base into the sea,
And there assume some other horrible form,
Which might deprive your sovereignty of reason
And draw you into madness?

Horatio is the only sensible person in this entire play, BTW. We can have even more winking fun calling this “Distracted Boyfriend Hamlet” considering there’s a whole lotta subtext in the Hamlet/Horatio relationship. The author Myrlin Hermes breaks this down for us:

In Act 3, Hamlet calls Horatio “Damon dear,” a reference to the tale of Damon and Pythias, two Greek gentlemen so famously devoted to one another that each was willing to sacrifice his own life to save his friend’s. … There may be a double meaning, then, in Horatio’s declaration “I am more an antique Roman than a Dane,” as Hamlet lies dying in his arms. The brokenhearted scholar, like Romeo, means to drink from the poisoned cup and follow his beloved into death. It is only after Hamlet begs him “[i]f thou didst ever hold me in thy heart…in this harsh world draw thy breath in pain/to tell my story,” that Horatio relents, and is spared Romeo’s fate.

I’ll stop myself before I write an entire academic essay based on Binah Q.’s Hamlet meme but I will continue to insist that this is the finest version of “Distracted Boyfriend” you’re likely to encounter on a windswept night in Denmark. Now will someone do Macbeth?