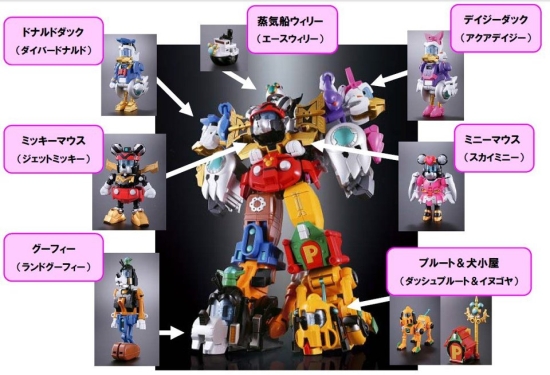 If someone were to pitch us an action figure that’s essentially robotic versions of Disney’s popular characters mashed together to form some kind of Voltron, we would have probably turned them down. That was before we saw what’s being called the Chogokin King Robot Mickey & Friends action figure being released by Tamashii Nation. Now, it’s pretty much all we want.

Chogokin King Robot Mickey & Friends is composed of Mickey and Minnie Mouse, Steamboat Willy, Donald and Daisy Duck, Goofy, and Pluto. Ace Willy is the head, Jet Mickey and Sky Minnie will be the torso, Diver Donald and Aqua Daisy are the arms, while Land Goofy and Dash Pluto & Doghouse will be the legs.

The figure will be previewed at the upcoming Tamashii Nation 2012 event this October 26th to 28th. Chogokin King Robot Mickey & Friends will be available for 12,800 yen, and slated for March release.

Of all the names, the best they could do was “Land” Goofy? That just seems downright disgraceful. If they’re going to build a giant robot out of the group, why does Goofy get stuck with a lame name? That’s just sad. 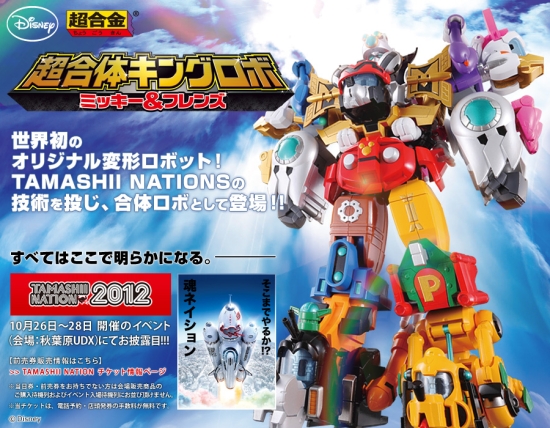 For anyone curious, 12,800 yen comes out to around $160. Yes, you could purchase your very own Chogokin King Robot Mickey & Friends action figure! While supplies last.