Disney Reveals Its 2013 Holiday Movie, Frozen (Which Is Not About Dinosaurs) 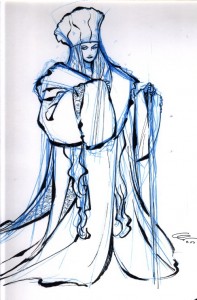 There was a small bit of confusion when Disney said it would be making an announcement about its new feature set for November 2013. During the D23 Expo, we learned about two new Pixar movies, one of which would be about dinosaurs. The other was said to be about going inside the human mind. Well, this movie is neither of those, nor is it PIxar — it’s called Frozen, and is based on the Hans Christian Anderson fairy tale, The Snow Queen. And we already have a picture — of the villain, at least. Because here’s what we can start getting psyched about: a new Disney heroine.

Let’s go back to a less chilly time: August. The D23 Expo took place in middle of that month, and it was then that we learned about Disney Pixar’s lineup for the next couple of years. They didn’t have a whole lot of details, but they did announce two movies for 2013 and 2014, to be directed by Pete Docter and Bob Peterson. Docter’s movie, then known as The Untitled Pixar Movie About Dinosaurs, was scheduled for November 27, 2013 while Peterson’s movie, known as The Untitled Pixar Movie That Takes You Inside The Mind, was lined up for May 30, 2014. But The Snow Queen, as it was formerly known, was nowhere on the radar — at least it wasn’t in August. Now, all of a sudden, we might have ourselves a new Disney heroine? Here is a summary of the original story (not the movie) from Geek Tyrant:

“They live across an alley from each other and happily chat, play, and tend their lovely rose garden. The children are happy until tragedy strikes Kay. His eye and heart are pierced with fragments of a mirror, and the loving boy Gerda knew vanishes. The Snow Queen has put him under her spell and taken him to her palace of snow and ice. It is up to Gerda to find him and bring him home to the love that awaits him.”

We’ll take this moment to acknowledge the whole “they renamed yet another Disney movie with a female lead to attract more boys to the movie and now it’s an adjective” thing.

When the press started catching on to a possible announcement from Disney about a movie called “Frozen” that was going to be released on November 27, 2013, some wondered if this was still going to be the movie about dinosaurs. Perhaps the end of the dinosaurs? A theory that the Ice Age ended the dinosaurs? Yeah, probably not. But now, it’s this is obviously not the dinosaur movie. At all. And if you’re wondering if there’s any news on that dinosaur movie (or the human mind one), well, we’ve got nothing. We do know that Frozen will be a computer-animated movie and that it will be released in 3D. As of right now, there is no director attached, but it seems like this story has been on Disney’s wish list for a while.

The good news is that we have another Disney heroine to look forward to! The bad news (which isn’t, honestly, that bad) is that we still know nothing about the dinosaurs.

ETA: This is not a Pixar movie. We apologize for the error.