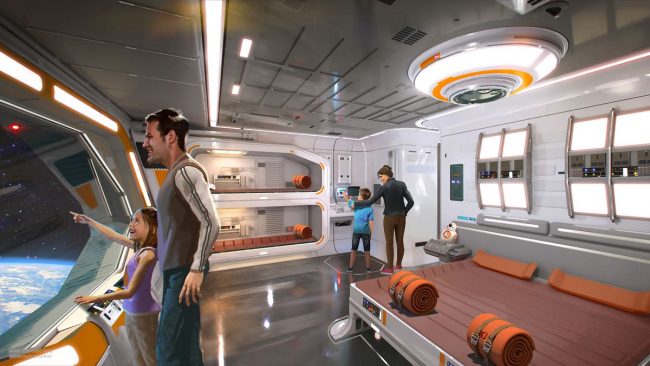 “From the second you arrive, you will become a part of a Star Wars story,” said Bob Chapek, chairman of Walt Disney Parks & Resorts. “You’ll immediately become a citizen of the galaxy and experience all that entails, including dressing up in the proper attire. Once you leave Earth, you will discover a starship alive with characters, stories, and adventures that unfold all around you. It is 100-percent immersive, and the story will touch every single minute of your day, and it will culminate in a unique journey for every person who visits.”

Disney is really going all-out with this. They’ve even projecting images of outer space onto all the resort windows, so that guests feel like they’ve really left Earth for the Star Wars universe. Guests dress in costume during their stay, and as previously hinted, their actions will have “consequences.” You can be recruited for missions, including some that involve flying the Millennium Falcon ride – and the results of your mission, successful or not, will follow you through the experience. It’s unclear how long the guests’ arcs will last, but Chapek said that each guest will have a “dedicated, multi-day adventure.”

The hotel will also feature a Cantina, where they’ll serve “unique drink concoctions” and DJ Rex (the droid pilot from Star Wars Tours) will play music.

The two Galaxy’s Edge lands will open in 2019 in both Anaheim and Florida (Anaheim first), and they should be very similar. Both will feature the two announced rides: one where you and a crew fly the Millennium Falcon, and one where you are “right in the middle of a battle between the First Order and the Resistance, including a feeling that you’re actually inside a Star Destroyer.”

However, there’s no concrete date on the resort opening yet, so you’ve got plenty of time to start saving up your credits.

(Via StarWars.com, io9, and Polygon; image via Disney Parks and Resorts)