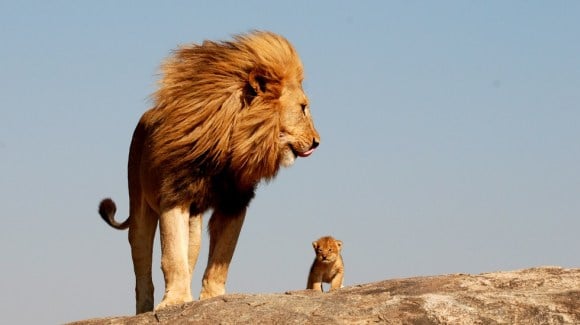 After topping the box office for the second week in a row — and only showing a 27 percent drop — Disney has announced that it will be extending its engagement of The Lion King 3D for at least one more week. It was originally only going to run for two weeks, ending this Friday, but now that 1994 movie is attracting a huge audience (and beating Brad Pitt‘s Moneyball in the process), the studio has realized something that spells wonderful news for the movie theater industry: people definitely like going to the movies again.

Since it opened last Friday, The Lion King 3D has taken in $61.7 million, and now Disney might keep it in theaters until it’s released on Blu-ray on October 4. There were no additional or specific details about the extension, but the real news is what this means for movie theaters and fandom, and how they can work together to make sure the former will endure.

The Lion King was always one of Disney’s more popular animated movies, even getting a well-received adaptation on Broadway. But while some people might frown upon the lack of originality in re-releasing a movie from two decades ago just to make money, this says something about the moviegoing public wanting to share in the experience of an established fan favorite — with other fans.

Last week, we reported that Ghostbusters would be returning to the big screen for a limited engagement in North America — after there was a palpable outcry that it was originally only going to be re-released in the UK. Yet another example of a popular movie from another time that will get a bit of a facelift and then return to theaters with a built-in audience, plus the people who will be introduced to it for the first time.

Meanwhile, video streaming, on-demand channels, etc. are still dominating how we watch TV and movies. But none of these media can provide the communal experience that a theatrical release can. From the LA Times:

Theatergoing in the next decade may increasingly need to concentrate not the frisson of the new but the comfort of the familiar. The more individuated thrill of discovery — which can be experienced at home as easily as in a movie theater — could be de-emphasized in favor of the communal uplift that can really only happen in a large public space.

This has come a long way since midnight screenings of cult classics — the moviegoing public likes to see something familiar, all cleaned up and remastered … and with a big crowd of people with whom they can share it
all.