The Future is Dead: Dippin' Dots Files for Bankruptcy 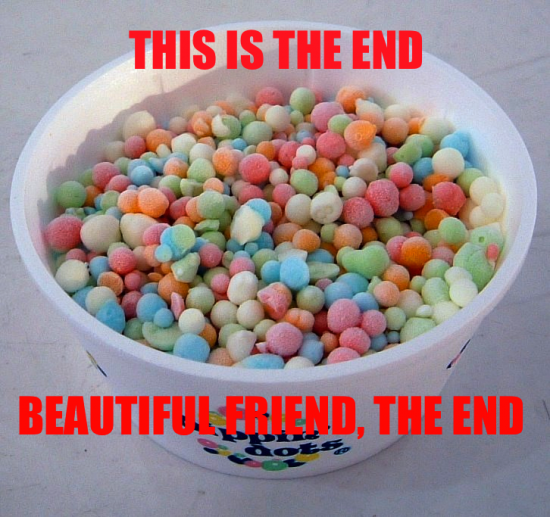 In the worst news to strike the futuristic food industry since the death of New Coke, Dippin’ Dots has filed for Chapter 11 bankruptcy. The so-called Ice Cream of the Future was apparently up to its eyeballs in debt and has been trying to stave off foreclosure by Regions Bank, to whom Dippin’ Dots apparently owes $11.1 million. This, friends, is a disaster.

Dippin’ Dots, whose sole product consisted of hard pellets of ice cream flash-frozen with nitrogen, seems to have had something of an uphill battle since its invention in the late 1980s. Though ubiquitous in malls, low-end movie theaters, and amusement park kiosks, it failed to truly grab the public imagination. Perhaps it was because the frozen morsels cost far more than regular ice cream, meaning that nearly all sales were made to unwilling parents of demanding children who had most likely never experienced the underwhelming effects of said Dots.

Interestingly, the company apparently brought in $27.7 million in revenue last year — a cool million more than the year before. However, for a product perhaps best described as being slightly more palatable than astronaut ice cream, that may not be enough.

But will Dippin’ Dots melt away like so many manic summer dreams? Possibly not. The WSJ notes that Chapter 11 is frequently used by companies to reorganize and emerge anew — see: General Motors. However, the bankruptcy of the Ice Cream of the Future could just be another sure sign that there is no future and we should all just strap ourselves in for the 2012 apocalypse.