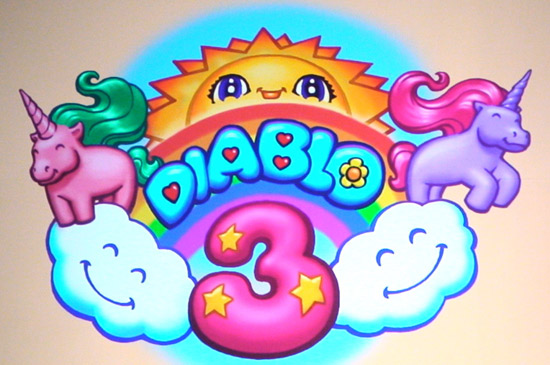 In my writeup of the Diablo lore in preparation for the release of Diablo III, I neglected to mention the (in)famous Cow Level. It began as a rumor in the original Diablo and only became reality in the second game. References and persistent denials about the Cow Level have become as much a part of Blizzard as delays and obsessive secrecy. Now, it seems that Diablo III has a secret cow level of its own. Spoiler-ish information and a video follow below.

The secret level in Diablo III is called Whimsyshire, and is apparently a result of the complaints after the game’s unveiling two years ago that it was too cartoony and colorful. At the time, Blizzard released the image you see above as a response, calling it the official Diablo III logo.

However, the company has taken it a step further with Whimsyshire, which is a happy-happy My Little Pony: Friendship is Magic-style level sodden with rainbows and crawling with animated flowers, teddy bears, and sparkly unicorns. Who want to kill you, of course.

Interestingly, Whimsyshire seems to be low on high-level monsters and has no big boss to fight. This might be a response to criticism that the original Cow Level had too many rare items and was too good a place for grinding that it actually broke the game. Whimsyshire, by contrast, is more in line with a joke that players can just have fun with.

Here’s a look at the level, from Force Strategy Gaming. The video discusses some minor spoiler-ish details about Diablo III, so consider yourself warned.

While getting to the Diablo II Cow Level was relatively straightforward, getting to Whimsyshire requires items from all the acts of the game, and some of those items can only be obtained during rare random events. So, again, some spoiler-ish information follows below. Here’s the full Whimsyshire recipe, again from Force Strategy Gaming:

Though I haven’t yet had time to try this out for myself, it sure looks like an awful lot of fun.