Destructoid Writer Takes Aim at Felicia Day, Shoots Himself in the Foot 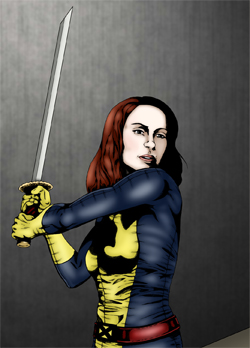 It’s no secret that tensions have been extremely high in the gaming world lately, especially surrounding gender relations and prominent women in the industry.

Certainly it hasn’t been the kind of environment that you’d, say, want to bumble into by means of bashing one of the most beloved women in geek culture.

It might have something to do with the recent spate of horribly misogynist outbursts against women in gaming, both fictional and real. Perhaps Perez felt a sense of solidarity with the many gamers who feel sexism is just part of the game. Perhaps he felt threatened by the rising collective voice of women and feminists who have spoken out against male-dominated gaming culture, a voice Felicia Day has increasingly come to embody.

Or maybe he was “new to Twitter” and just too drunk not to realize what a horrendously bad idea this was: 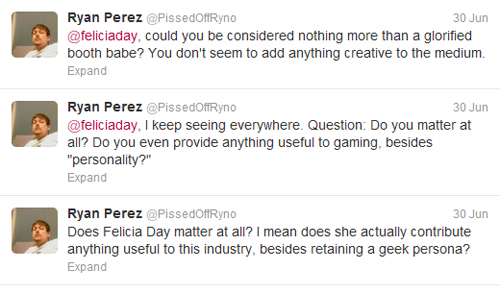 One thing we’re still confused by, idiocy not withstanding, is why it was Felicia Day in particular who served as the target of Perez’s drunken tirade against…whatever. As part of Perez’s 7-part apology, issued directly to Day on Twitter Saturday night, he stated, “I really had no idea who you are,” and even magnanimously offered, “I plan on actually viewing your portfolio before saying more about…well, you.”

Really? Really? That’s a lot of vehemence against someone who only exists to you as a name. Even more baffling is how someone can land a gig writing for a popular gaming news and review site without having any (professed) clue who Felicia Day is. The star of Dr Horrible and geek cult hit The Guild recently launched her own Youtube channel and web presence called Geek & Sundry, meant to tap into her huge and expanding fanbase and cement her position as a marketable, formidable voice for all aspects of geek culture, including women and casual gamers.

Even if Perez somehow managed to miss her many contributions to the culture (our favorite is still “Do You Wanna Date My Avatar?”) it’s likely that it wouldn’t have mattered anyway. Perez, in his drunken state, probably simply lashed out at Day because he knew her as a well-known and well-liked female name in gaming culture—an easy target in a moment where the recent outrage over sexist tropes in video games has led to an increasingly polarized community.

Perez’s words made it abundantly clear that pervasive, ongoing sexism begins with a basic lack of respect and recognition for women, from the basic harassment catalogued every day at Fat, Ugly, or Slutty, to veteran female game developers who will only speak anonymously about how they’re afraid to speak at all, and female games reporters disgusted with convention staff assuming they know nothing about video games despite their credentials. If a woman who has contributed as much to the culture, genre, and perception of gaming as Felicia Day can be dismissed as “a glorified booth babe” by someone who hasn’t even bothered to read her “portfolio,” then it’s safe to say that the problem is even worse on the ground for less well-known women who make their living in the industry, much less for female gamers themselves.

But this point seemed to be lost on Perez, who refused to quit, at first dourly adding, “I should have been smarter and just made a comment against God or the Catholic Church,” then continuing to imply that his sudden fall from grace was the fault of irate fans and bad luck. To an outraged Wil Wheaton, he claimed bitterly, “I’m small-time. Nobody should care about what I say.”

Twitter, however, cared very much, as this sampling taken from Tumblr shows: 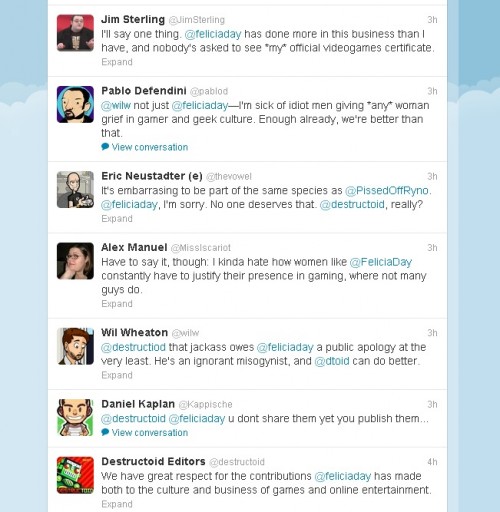 So did Destructoid. Although only one of Destructoid’s seventeen editors is female (ETA: Destructoid’s Community Director Hamza Aziz contacted us to clarify that the site actually has has two regular female writers & one additional freelancer), they certainly recognized the need for damage control. Less than a day after the comments went up on Twitter, its editors issued a public apology to Felicia Day and her fans: 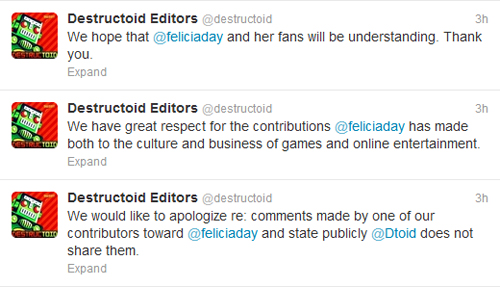 They also hastened to add that the popular console review site has “ended its relationship with Ryan Perez effective immediately.” Not that this kept other companies from immediately declaring their intention to hire him (although this specific company just seems like it’s setting up another journalist for a Commander Shepard takedown).

Nonetheless, fresh from a rockin’ VidCon performance of “I’m the One That’s Cool,” with Hank Green, Day graciously accepted Perez’s apology. As for Perez, he did show some glimmers of enlightenment in the end: when propositioned to “support” a project called “Misandry in Video Games,” he responded, “Appreciate the offer, but even I think dickheads like me still make up the majority.”

Header image taken from this awesome fanart of Felicia Day as Kitty Pryde by drawing-bored.