Finally: You Can Play Desert Bus on Your Phone 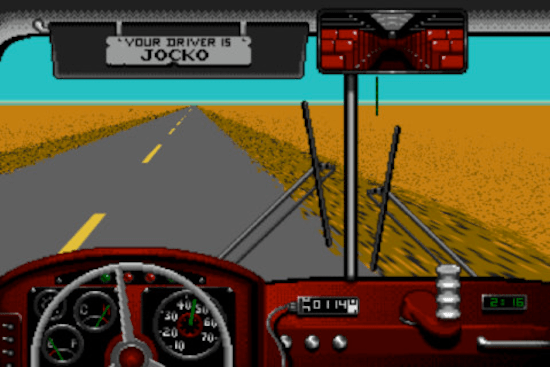 The saga of Desert Bus is as long and storied as the game itself. Originally created in 1995 by magicians Penn and Teller for the short-lived SegaCD, Desert Bus was merely a piece of a much larger suite of games called Smoke and Mirrors. Though never released, Desert Bus gained much notoriety as it involved driving from Tucson from Las Vegas at 45 mph in real time.

Now, after years of waiting, the game is available for your mobile device. The geniuses at Amateur Pixels have faithfully recreated the game — right down to the bad alignment that causes the bus to occasionally pull to the right — for both iOS and Android for a mere $.99. The bad alignment of the bus is actually essential to game play, as it means that you cannot simply set the game down and let it play itself.

You might be wondering what happens if you, say, let the bus drive off the road. If you allow your faithful bus to ride the shoulder too long, the bus breaks down and will refuse to move. Apparently on the SegaCD version, when the bus breaks down you are towed back to Tucson in real time. Sadly, this does not appear to be the case in this mobile iteration. Also, returning to the home screen of your phone while playing Desert Bus is not recommended.

Putting the game on a mobile device adds yet another element of danger to the game, as you risk being interrupted by a phone call, and no one has yet managed to produce a phone battery that will last long enough to make it through an entire session of Desert Bus on a single charge. So you’ll be stuck, tethered to the wall and cradling your phone.

Part of Desert Bus’s return to prominance is thanks to the Child’s Play charity, which has made a real-time run through of the game a staple of its events. In keeping with this, the proceeds from the mobile version will go towards charity. Making the world a better place, one agonizing game at a time.