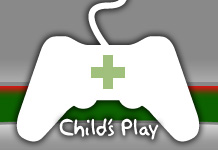 Child’s Play, the gamer-organized charity that has gathered donations for kids in children’s hospitals since 2003, has been crushing it this year. Their annual charity dinner and auction, which took place on Tuesday night, raised more than $183,000 in just two hours, pushing the charity over $1 million in donations this year. The awesome Portal Gun made by Volpin Props sold for more than $15,000, as did PAX 2010’s Omega Claw. Meanwhile, the people behind Desert Bus for Hope delivered more than $200,000.

The proceeds from the gala and auction add to donations already contributed by gamers around the world, many organizing their own events and fundraising activities in their own cities. Desert Bus for Hope presented a check for $207,000 to Child’s Play at the event. In total, Child’s Play has raised more than $1.1 million this year.

“Every year we are blown away by the fantastic items and incredibly generous bids at the gala and auction,” said Kristin Lindsay, Foundation Coordinator for Child’s Play. “Even more heart warming is the thousands of gamers that can’t attend the gala but organize their own local fundraising. It’s this grassroots community activity the accounts for the majority of Child’s Play donations.”

As Penny Arcade’s Tycho [a.k.a. Jerry Holkins] notes, the successful charity dinner is “only a footnote to the larger drive; a drive which is ongoing, and has need of you.” If you’re interested in getting involved, check out Child’s Play’s page.