Our 5 Favorite Denzel Washington Roles for His 63rd Birthday 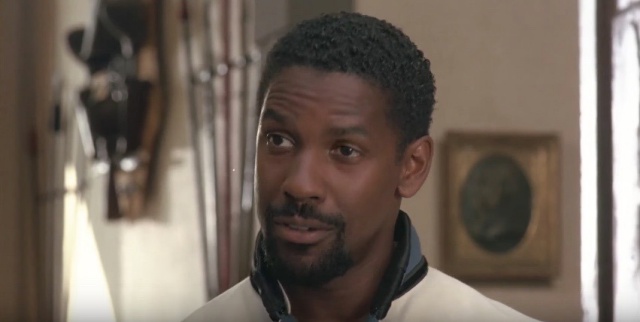 Today is the 63rd birthday of legendary actor Denzel Washington. For years, he has been gracing our screens with not just beyond excellent acting abilities, but sex appeal. Denzel was the first black actor to win People’s Sexiest Man Alive, in 1996. There are plenty of iconic roles under Washington’s belt, and this list could easily be over a dozen long, however, I’m going to pick our 5 favorite Denzel features.

Happy Birthday, Mr. Washington. King Kong ain’t got nothing on you!

In this movie, based on a true story, Denzel plays Rubin Carter, a former middleweight boxer who was wrongly convicted of a triple murder in a bar in New Jersey. The movie deals with the 20 years Carter spends in prison with flashbacks to his career as a boxer. Of Denzel’s performance, Roger Ebert said, “This is one of Denzel Washington’s great performances, on a par with his work in Malcolm X … Washington as Hurricane Carter is spare, focused, filled with anger and pride … This is strong stuff, and I was amazed, after feeling some impatience in the earlier reaches of the film, to find myself so deeply absorbed in its second and third acts, until at the end I was blinking at tears. What affects me emotionally at the movies is never sadness, but goodness.”

Look how little Denzel and Tom Hanks are in this film! I mean, both men were in their 30s, but still, they just seem so young compared to the way we know them now, in The Post and Roman Israel, Esq.

Philadelphia was the first big Hollywood movie with a budget and star power that dealt with the issue of AIDS. While there were intimate scenes cut between Hanks and his love interest, played by Antonio Banderas, it was still a groundbreaking movie. Washington plays Joe Miller, the lawyer who helps Hanks’ character, Andrew Beckett, sue his former company for wrongful termination when they fire him for having AIDS. Miller’s character is a great examination of how people can grow past homophobia with empathy and compassion for other people. It would be easy to make the character a pure hero, but instead, the film allows him and the audience to mature past their former discriminatory ideas by putting them on display.

The role that finally got Denzel his Oscar. There’s little to be said about this movie that hasn’t been said before, but in terms of career, this was the first time Washington played an irredeemable bad guy. Training Day is still the king of neo-noir crime movies, and every film with a dirty cop since has been taking cues from it and Denzel’s turn as Detective Alonzo Harris. He is frightening, charming, and seductive all at the same time, which is what makes Harris so dangerous and compelling as a character.

Remember the Titans is my favorite sports film ever, and the fact that Denzel did this movie a year before Training Day is a testament to just how versatile Washington is an actor. Coach Boone is a stern but loving father figure who’s determined to do right by his team and keep them together in a world that’s determined to keep them apart. The speech he gives at Gettysburg remains one of my favorites to revisit, and there is no moment on-screen where Denzel does not shine.

The movie that everyone agrees should have been Denzel’s first Oscar win and probably one of Spike Lee’s best joints. This 1992 biopic of Malcolm X (known later in life as el-Hajj Malik el-Shabazz) is probably one of the best biopics out there about a Civil Rights leader, up there with Selma. While Washington doesn’t look like Malcolm X (X was 6’4 with light skin and reddish hair), what he could do was channel the charisma and power that X had, in both his speaking and his presence. It’s required watching for anyone who enjoys film period, but also for anyone who wants a pretty accurate—though definitely embellished at points—look at the man Malcolm X was, flaws and all.

Honorable mention: Don Pedro, Prince of Aragon in Much Ado About Nothing (1993). Fun fact, Tom Hiddleston said that seeing Denzel in this role inspired him to be an actor. That’s right, you have Denzel to thank for Loki.

What are your favorite Denzel roles?