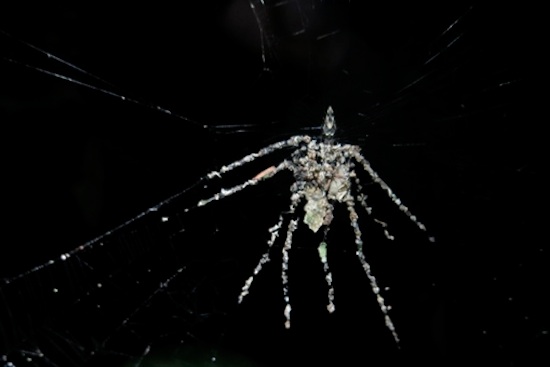 Bad news, arachnophobes. Biologists working in the Peruvian Amazon believe they may have discovered a new species of spider — a tiny arachnid that builds decoys of larger spiders in its web, and manipulates them like puppets. Puppets that are even more terrifying than regular puppets, because they look like spiders.. Commence being creeped out for very good reasons…now.

The spider — thought to be a previously unknown species in the decoy building genus Cyclosa — is just 5 millimeters across. The little creepy crawler can seem much more intimidating when accompanied by its big, bad buddy, though. Researchers have observed 25 specimens of the creature, which uses twigs and chunks of dead leaves to build a model of a much larger spider in its webs.

The decoy doesn’t just sit around, though. The smaller builder acts as a puppet master for its creation, pulling the strings of the web to make the model appear to be alive and kicking. Though other Cyclosa spiders have been known to use discarded egg sacs to create simple decoys, this is the first time a model so advanced has been observed — other decoys don’t even have legs, much less the ability to look like they’re using them.

For now, the jury is out on whether the spider represents a new species, or just a never before seen behavior in an already described one. All of the specimens of the creature so far have been acquired in a small patch of Peruvian floodplain, so its unclear what their range may be. The team that discovered them hopes to return next year with documentation that will allow them to gather spiders for study and formally identify the creature as soon as they can.