The Handling of Death in Games: The Summoner, the Ancient, the Mortality

"Games are more than just mindless entertainment. They’re works of art that mirror truths we don’t always want to see, but should." 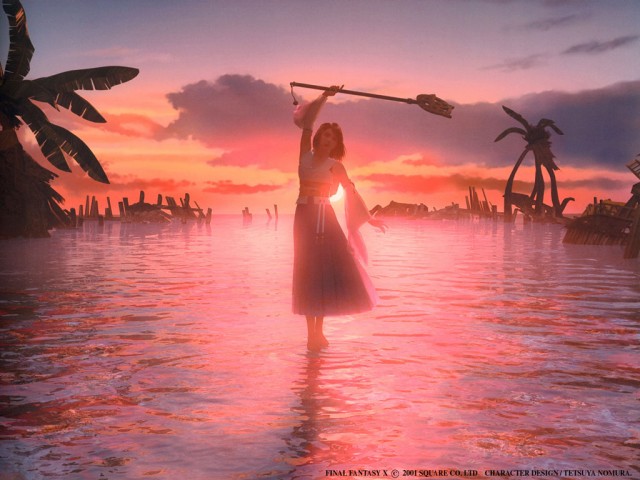 I attended my first wake when I was about six or seven years old. The memorial service was for my great aunt, a pint-sized woman with more fire and joy in her fingernail than I’ll ever have in my entire being. Lovely as she was, I never said goodbye to her in my own way or experienced the proper closure I personally needed. I was barred from entering the viewing room and made to cover my eyes with my hands whenever I walked past the open entryways. I wasn’t permitted to see my great aunt’s body, because my family feared it would traumatize me. Now that I’m revisiting this memory as an adult woman, I genuinely wish there had been an open dialogue about death, because I would have an easier time processing it.

Death is a universal phenomenon and yet, in the Western world, there’s a kind of societal severance from it, and it’s stigmatized. Now that home wakes are less common, it’s more typical for a professional to collect the corpse from the home and deliver it somewhere for embalming. The physical act of removing a deceased loved one really exhibits my point and stands as a visual representation of the fear and stigmas that organically develop from this separation. Even the act of embalming is somewhat artificial because an embalmed body, which gives the illusion of a deep and peaceful sleep, looks vastly different from a body that hasn’t undergone any kind of preservation process—a slacked jaw and sunken face. Death is not attractive, but it’s natural, and it happens all over the world. It all contributes to this removal I’m referring to—a sort of hands off approach to death.

I was always intrigued by death and deathcare practices, but never gave much thought to this separation and how it might manifest itself in video games, a medium I often write about and am openly obsessed with. Caitlin Doughty, author of Smoke Gets in Your Eyes, introduced me to other perspectives on death and the strained relationship our Western world has with it. She’s very death-positive in that she, despite the negative stigmas surrounding death, openly addresses it and pushes against the idea that having an interest in death is inherently wrong or bizarre. When I applied this lens to video games, I was shocked to learn that death is so commonplace that it’s hardly addressed or given much consideration.

Rarely do players experience the memorialization of deceased characters, positive portrayals of deathcare workers, open displays of grief, careful and loving care of dead bodies, putrefaction of bodies, ritualistic burials, and so on. Games like Bloodborne and Dynasty Warriors, which fall into the hack and slash category, allow for absolute carnage to occur. The enemies frequently inundate the player, an endless flood, creating a kind of wall that’s intended to be sliced through and taken down. Do we ever stop and wonder who it is we’re slaughtering? Are they more than just mindless drones? In many games, when enemies are killed, their bodies usually disappear, or they’ll remain perfectly preserved and intact. There’s nothing gruesome or real about it. Again, it further supports this disengagement with realistic death and the mortality of it. Where do we locate more realistic portrayals of death? What about the more human aspects of it? Do other games address death?

Rather than focusing on games that adhere to this separation and the stigmas that follow, there are a number of games that do show death and encourage a dialogue about it. Death is more than a stepping stone to the next level or achievement. In Final Fantasy X, a game about a woman’s pilgrimage and a blob-like monster that terrorizes her world, Yuna, the heroine, is so much more than a summoner. There’s an important scene in which Yuna performs a sending, a ritual that puts the dead to rest. As Yuna dances atop the water’s surface, a group of coffins bobbing just beneath her, there’s an incredible display of grief from the crowd encircling her. One woman clutches her stomach as she sobs while another collapses to her knees.

Yuna has fostered a safe space where open grieving is accepted and encouraged. In some cultures around the world, open grieving is expected and not frowned upon. There’s even a powerful instance in which Lulu, one of Yuna’s trusted friends and guardians, explains to Tidus, the blonde protagonist from another time period, the importance of a sending and what it means to them in their culture. There’s understanding in her eyes and, above all, sincere respect.

Yuna is comparable to a kind of deathcare worker in this scene. After Sin, the globular antagonist of the game narrative, overwhelms this particular village, it’s her responsibility to right the wrongs and tend to the dead. However, deathcare workers in much of the real world, particularly embalmers, are stigmatized because the physical handling of human remains is considered repulsive and undesirable by the public. Though Yuna doesn’t handle the bodies (dressing, washing etc), she’s still a kind of deathcare worker in that she plays a role in the grieving process and the care of their loved ones.

When Yuna’s ritualistic dance intensifies during the sending, a waterspout forms and lifts her up high above the wailing crowd. Her elevated position illustrates her importance and power, combating the negative stereotype surrounding deathcare workers. Her role as a deathcare worker is notably important because, in her culture, it appears to be a privilege and honor, a role that’s strictly reserved for summoners. The water in the scene serves as a symbol of life and purification, which opposes the idea that deathcare is dirty work.

In continuing the discussion of ritualistic burials, there’s an entire cinematic dedicated to the ritualistic burying of a much beloved character in Final Fantasy VII. Likely the most famous scene in video game history, Cloud, the spiky haired protagonist, puts Aeris, the mystical woman who can communicate with the planet, to rest in a body of water. It’s a scene that speaks to the very real possibility of death and the universality of it. In Yuna’s scene, the caskets are closed, which severs the potential connection to the humans inside them. Aeris’ burial is startling because there’s no coffin and she’s out in the open. She’s also a younger woman and the one of the last of the Cetra, an ancient species of deeply spiritual and intuitive beings. Surely someone so mystical and young can evade death, right? The emotional scene is up front about the presentation of Aeris’ death. It’s jarring in that it forces the player to stop, think, and feel.

Skyrim’s NPCs (non-playable characters) will occasionally aid the protagonist during a quest. They’ll trail after the protagonist, assist them in battle, act as a mule for additional items, and so on. Unless they’re an essential piece to the current quest line and cannot die as a result, most are in danger of immediate death, their bodies and the content of their inventories later appearing in the hall of the dead. It’s a feature that’s unique to the Elder Scrolls franchise, particularly for an open world game, a type of game that seems limitless and features a lot of moving parts. Though it’s just a miniscule part of the game, it’s still worth noting because NPCs are considered disposable characters. Nobody bats an eyelash when a level one farmer gets killed and his farm ransacked because he exists to say a funny line or two (often in a repetitive fashion), holding no real weight or influence in the narrative. It’s a little sad, really. I have a special place in my heart for NPCs, but they’re not always treated with respect and dignity. Though we don’t see the ritualistic burial taking place, their bodies are still being tended to and laid to rest and that’s comforting and beautiful.

So far I’ve discussed the handling of dead bodies and the grieving process, but what about the dying? Aeris’ death was so sudden that she didn’t have time to suffer or dwell on her inevitable fate. As life slipped out her, her body collapsing, a knowing smile formed on her lips. It’s almost as if she knew that death wasn’t the end, but simply a path that led to the next stage of existence. In episode four of Life is Strange, when Max is operating within an alternate reality, a chair bound Chloe asks Max to kill her, a raw and powerful moment that, without fear or hesitation, tackles the issue of assisted suicide. I refused to kill Chloe at first, but after mulling it over some I rewound and upped her morphine dosage to a dangerous level. Who was I to deny Chloe’s agency? It was hard to see Chloe in pain. It was even harder to know her in an alternate timeline, a timeline in which Chloe was physically active and a real free spirit. The controversial topic of assisted suicide likely stems from tense relationships with and differing attitudes towards death. It’s often considered a cowardly act and un-dignified death. However, I find it interesting that death, as an experience, is simultaneously universal and personal.

Death doesn’t have to be a taboo topic of conversation. Personally, I respect games that challenge its players and open a dialogue about uncomfortable subjects. Games are more than just mindless entertainment. They’re works of art that mirror truths we don’t always want to see, but should.