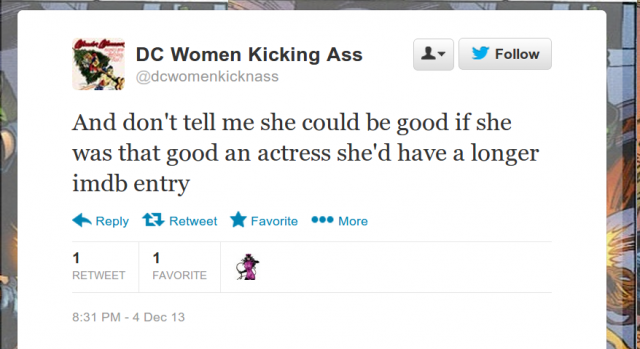 The news that actress Gal Gadot will be playing Wonder Women in Man of Steel 2 is just hours old, and already the Internet has expressed strong opinions about it. One of the most surprising reactions came from the Twitter account for the DC Women Kicking Ass blog, which has equated past experience with acting ability.

In the description of the Twitter account, it says that @dcwomenkicknass is “The Twitter home of the DC Women Kicking Ass blog” which can be found on Tumblr. As per the contact page, that blog is run by a woman named Sue. We think it’s safe to assume it’s the same person who runs the Twitter account.

We’ve used the relevant tweet as the cover image for this post, but to give it a bit of context, here are the few tweets preceding it:

I don’t know weren’t any actresses with a track record record available?

Right off the bat, it seems that Sue isn’t pleased with the Gadot casting, preferring a more well-known actress to the fairly unknown Gadot. That’s certainly fine. People are entitled to their opinions.

Not a bad point. We won’t pretend to be that familiar with Gadot’s previous work, though we also only know Cavill as Superman. We know he had roles before that, but it wasn’t until he was cast in Man of Steel that we took notice of him, and without heading to IMDB, we couldn’t tell you another thing he’s been in off the top of our heads.

I mean you get Oscar nominees for Selina and Lois and we get someone with this resume as Wonder Woman?

You’re starting to lose us. Yes, Oscar-nominated actresses played other female comic book characters, but we’re not sure how that applies here.

This. This right here? This what we have a problem with. Again, our issue isn’t that Sue doesn’t seem pleased with Gal Gadot as Wonder Woman, it’s that she seems to think there’s a direct correlation with number of previous roles and acting ability.

Gadot can’t be good because she hasn’t appeared in that many other movies, or ever been nominated for an Oscar? Please. There’s not a GIF on the Internet that can accurately reflect how hard we’re rolling our eyes at that logic, and the Internet is like, 40% eye-rolling GIFs. That’s how ridiculous this is.

There’s been no shortage of backlash on Twitter, and it seems Sue has dug in on her position, tweeting dozens of replies to people since that tweet went live.

A few people mention Jennifer Lawrence as an example of an unknown actress being cast in a comic book movie role. Sue is right to point out that Lawrence was nominated for Winter’s Bone, but wrong to imply that her Oscar nomination is what qualified her to be in X-Men: First Class.

Before Winter’s Bone Lawrence’s previous IMDB credits were fewer than Gadot has now, and mostly limited to small TV appearances. She was exceptional in Winter’s Bone not because she had extensive credits going into it, but because Jennifer Lawrence is a great actress.

Our own Victoria McNally got into it a little with Sue after seeing all of this go down, and here’s her response:

@vqnerdballs that’s not what I said

Since Twitter doesn’t have enough characters for this sort of thing, Victoria would like to clarify exactly why she’s disappointed:

But “Short IMDB page = not a very good actress” is a terrible message to be sending out into the world. The film industry isn’t really a meritocracy, and that line of thinking can be really damaging to aspiring actors who aren’t getting roles because they don’t fit a particular type — one that Gadot does fit to a large degree, but one that not every incredibly talented person does.

Actors get turned down all the time because they’re too tall, too short, too old looking, too fat, not fat enough, too dark skinned — Heck, they can even get turned down if their hair is the wrong color or texture, or because they wear the wrong clothes to an audition. Having talent helps in the long run, but it’s not the end-all-be-all, and it’s incredibly problematic to suggest that because someone hasn’t been given very many chances to prove themselves, that they shouldn’t be given any chances at all.

Is Gadot going to be great as Wonder Woman? We don’t know, but the way to form that opinion is to look at the quality of her previous work, not the quantity. Or we could always — Hera forbid — actually wait to see the movie to assess her performance.

UPDATE from Victoria: Sue of DC Women Kicking Ass has asked us to clarify the timeline of tweets, as there was some back and forth between us on Twitter that got lost when we embedded it to the article yesterday.  Here’s a full screen cap: 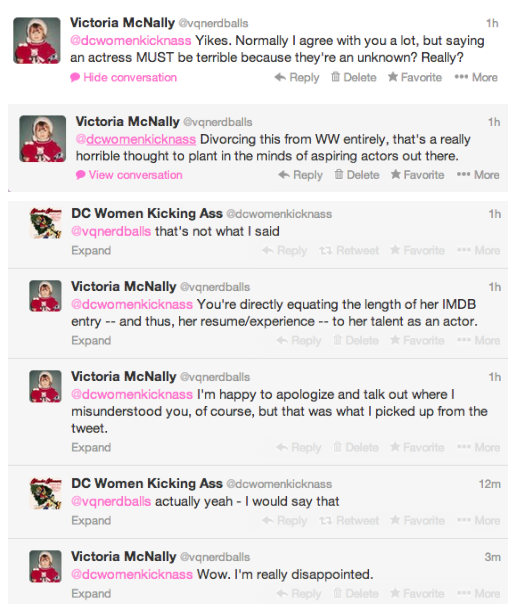 She’s also clarified her opinion on her official Tumblr and in the comments below, saying that, “Certainly and[sic] actress who hasn’t worked very much in film in their career could be a good actress. I’ve seen her work and certainly I don’t think she’s bad. But I also don’t think I’ve seen the range and experience that I’d like to see.”

The reply function on Twitter can make these kinds of back-and-forths confusing, so we apologize for our part in the confusion. However, we stand by our original statement that it’s unfair to judge Gal Gadot on the sheer length of her IMDB entry, which is still what Sue did in her initial assessment of the casting decision. She’s absolutely entitled to her opinion about whether or not Gadot is up to the part, but frankly, we’re still extremely disappointed in what we saw go down on her Twitter feed yesterday, and that’s probably not likely to change.