Why the DC Relaunch Could be Pretty neat | The Mary Sue

Why the DC Relaunch Could Actually Be Pretty Neat 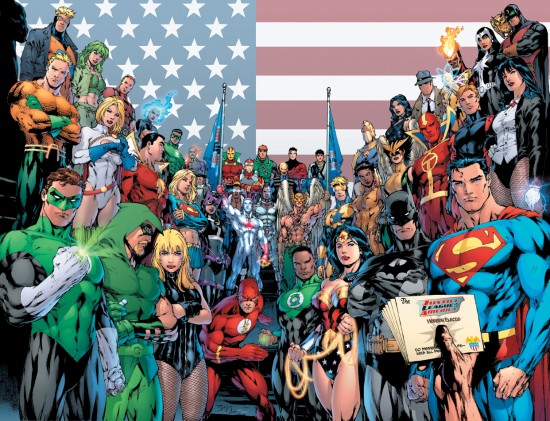 The world of comics is an ever-expanding one. With each new title comes a bevy of new superheroes, villains and general populace that then must be worked with when dealing with the greater continuity. Sometimes, this can lead to interesting developments like The Avengers or one of their various incarnations or can even lead to massive crossover events.

Regardless, continuity marches on and things become convoluted, complex and downright difficult to work around. It should come as no surprise, then, that DC Comics has decided to go ahead and “relaunch” their universe with all new #1s in September. It’s not as if this is setting precedent either. This is following in a long tradition of reboots, relaunches and general simplifications.

These types of events are sometimes met with frustration on the part of fans, such as the M-Day aftermath in the Marvel multiverse, or with genuine enthusiasm, like the previous Crisis on Infinite Earths storyline in DC Comics. More often than not, these stories herald the death of many different versions of superheroes and others that fans have come to know and love. (Though it likely deserves to be mentioned here, the Spider-Man: One More Day saga is just too painful to talk about.)

So, it’s with cautious optimism that I look forward to the coming “relaunch,” which you can brush up on over at The Mary Sue.

Not only is the first in the series being at least partially helmed by Geoff Johns, who has written many an excellent series — most notably Green Lantern stuff — but there’s a bit of a tease that there’s something more going on here than meets the eye. Why else would Bob Wayne, DC Senior VP Sales, send a nice lengthy letter consoling comic retailers?

One thing that sticks here is his specific mention of the 52 new titles coming. Er, relaunched old titles. Okay, let’s just say titles. To anyone who has been a fan of DC Comics for any length of time, 52 is kind of a special number. Why? Well, that’s because that’s the number of different universes they reintroduced when the DC multiverse became a thing again.

It could just be a clever wink and a sly nod at the importance of the number, or it could be something much more. It’s difficult to speculate on such things being so far removed from the actual time and place. As Bob Wayne goes on to say in his letter, however, it has created a spectacular buzz surrounding the upcoming event and DC Comics in general.

That’s the kicker though. USA Today notes that Marvel Comics has consistently come first in market share, leaving DC Comics with the silver—or First Loser—medal, since 2002. They may both be making the big bucks off their movie adaptations, but they are first and foremost a purveyor of comic books, graphic novels and whatever other terms people habitually use. Without proper source material, there’s nothing to adapt.

So, here we are comic book fans. It may feel like the past decade has just been a blur of huge events like Marvel’s Civil War and those for DC Comics that were similar in scope, but that doesn’t mean they weren’t incessantly cool and interesting when taken for what they were. Nothing is ever truly permanent in a world where imagination rules, so any changes that might frustrate you now will likely be erased by some sort of Joe Quesada-like figure in the future.

It is times like these that the often attributed Stephen King quote on movie adaptations seems most apt. I’m paraphrasing here, but it goes a little something like this: Adaptations can never tarnish the beauty and impact of the original. This same mindset can be applied to the varying events across the different comic publishers. This DC relaunch is no different. If it’s great, it’s great. If it isn’t, there’s always everything they made before that can’t be changed no matter how hard they try.