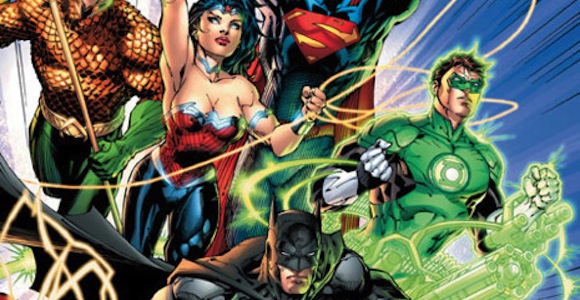 There have been rumors for a while that DC Comics has something big, really big, planned for this September. When the solicits (which issues will be published) for August were announced, it was hard not to notice that pretty much every ongoing series just happened to be finishing off its current storyline that month. Late yesterday afternoon DC made its formal announcement, confirming what pretty much everybody was already sure of, but also managing to pack a serious surprise and uncap a huge case of fan worry and skepticism.

DC’s plan involves a number of things: it will be restarting the continuity of the DC Universe and renumbering 52 different titles, starting everyone over at #1. We’re getting a revamped Justice League fourteen members strong, and an apparent fifty revamped costumes? But most shocking of all, DC will be offering all 52 of these renumbered issues by digital distribution, on the same day they appear in comic stores.

Personally I am way, way more interested in exploring DC’s move to day-and-date digital, something pretty bold for an industry that depends on a group of almost exclusively independent retail outlets to sell its product and a single company that holds a near monopoly on the distribution of the product it sells on both sides of the Atlantic.

Actually, wait, it’s not bold at all, it makes perfect economic sense… for the publisher, not the retailer or the distributor. Now, there aren’t many who have a lot of sympathy for Diamond Comic Distributors, but there are a lot of people who adore the folks at their local comic shop, and they’re worried for good reason. But this kind of thing isn’t isolated to the comic book industry, it’s happing to games (Steam vs. GameStop), movies (Netflix vs. Blockbuster), and books (Amazon.com vs. Borders), and it’s arguably already happened to music. It’s been slow to get to comics (if you want to buy your comics legally, anyway), but it has been on its way ever since internet speeds made feasible the sharing of large collections of images (which was quite a while ago, in internet time).

Yes, day-and-date distribution of 30-40% of DC’s titles is a huge blow to retailers. It was also inevitable that one of the Big Two would do it eventually, and DC decided to be the bold one in this case.

What do we know about the changes so far in DC’s Continuity? The artists who will be working on those 52 new books? Not much.

(In case you were wondering, 52 has been something of a magical number at DC since 2006, when 52 debuted, a year-long series that released once a week, was really very good and well put together despite the fact that it could have fit the stereotype of “giant, confusing criss-crossing event book with a billion characters,” and at the end shattered the DC Universe into 52 parallel universes.)

According to USAToday, three-quarters of DC’s creative teams will get shuffled around, but writers and artists who have proven to be good teams in the past will probably not be split up. “Some titles will return, a lot of titles won’t.” Jim Lee himself supervised the revamping of costumes for what sounds like the characters of each of the 52 renumbered titles. Whether these revamps are drastic or not remains to be seen. That’s the new Justice League above, and though Wonder Woman is keeping her recently revamped costume, everybody else seems pretty much the same. There are some popped collars, and Batman (if we can assume that we’re going back to one Batman and that’s not actually Dick Grayson) is going back to a black bat on a grey costume and dropping those silly seams.

As to actual differences in current continuity and September’s continuity? We’ve only got rumors. But one of them is that Superman might be shacking up with Wonder Woman in the new Justice League comic, in which case, we’re probably going to see a return of the Superman/Clark Kent/Lois Lane love triangle as well. But these are only rumors, and some have already been disproved, so do your imaginative speculating in a spirit of fun.

How you react to all these changes likely depends on whether you’re happy or annoyed with DC continuity right now, and, if you’re annoyed, whether you think DC can actually change its continuity in a way that you will like. A highly subjective powder keg of geek argument.

What do we find reassuring? Well, at least now we know why Batwoman #1 was delayed from this February, and since it was intended to come out earlier this year, it’s likely that the Greg Rucka origin story that won her a GLAAD award will remain intact. Also:

The recent emphasis on diverse characters such as lesbian superheroine Batwoman, Hispanic hero Blue Beetle and African-American adventurer Cyborg (who will be a core member of Johns and Lee’s new Justice League) also will continue.

It’s good to see DC making sure to reassure fans that it will maintain its universe’s diversity. After a not particularly great recent track record. It’s probably safe to assume that even DC will realize it if it makes a fourteen-member Justice League with one token girl and one token black guy, so the larger roster will also lend itself to the showcasing of some of the lesser known but beloved diversity of the DC Universe.

TL;DR: DC made a huge announcement that raised more questions than it answered. Now we have to wait for the answers.

There’s a lot of places that all this news is from, including two USAToday articles, a letter from DC’s Senior VP of Sales, and DC’s Official blog post about it.