“I Like To Date Birds”: A Primer On Sex And Tropes In Dating Sims 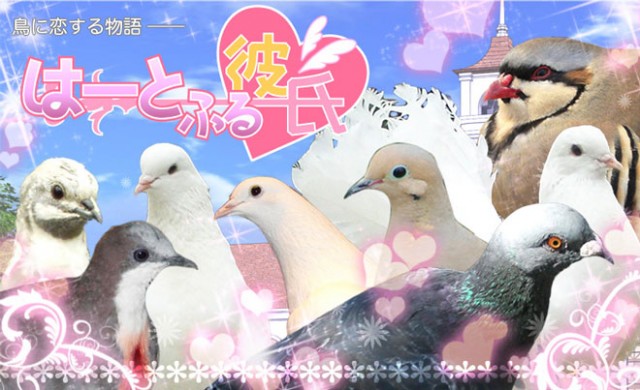 And gods. And aliens. And robots. And occasionally adorable cat- and dog-girls.

I’m a woman who really likes to play ren’ai (romance) games, a genre of story-heavy games primarily originating in Japan. Before I get too into talking about ren’ai games, here’s a handy guide to the jargon that gets thrown around when talking about a genre of games mostly prevalent in Japan:

There aren’t nearly as many ren’ai games available in English as there are in Japanese, and unsurprisingly, most of the ones available are geared towards men, the bishoujo games. However, otome games aren’t superficially that different from bishoujo games. Both genres often take place in a highschool or college setting, turn the weirdness dial up to 11 (see aforementioned gods and robots) and try to pair you, the unassuming player character, with one or more extremely attractive, bright haired, big eyed members of the opposite sex.

The differences start to become noticeable when you consider the engine that fuels many of these games: the most common ren’ai tropes. The games that play these tropes straight tend to be the male-oriented and well known games; especially games actually released in the West. 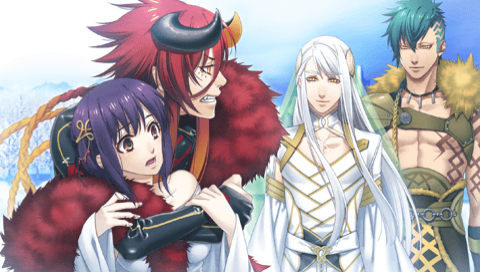 There’s a whole laundry list of tropes that fuel ren’ai games, probably as many tropes as there are games in this very prolific genre. But the tropes themselves aren’t bad: as TV Tropes puts it, “Tropes are just tools. Writers understand tropes and use them to control audience expectations either by using them straight or by subverting them, to convey things to the audience quickly without saying them.” 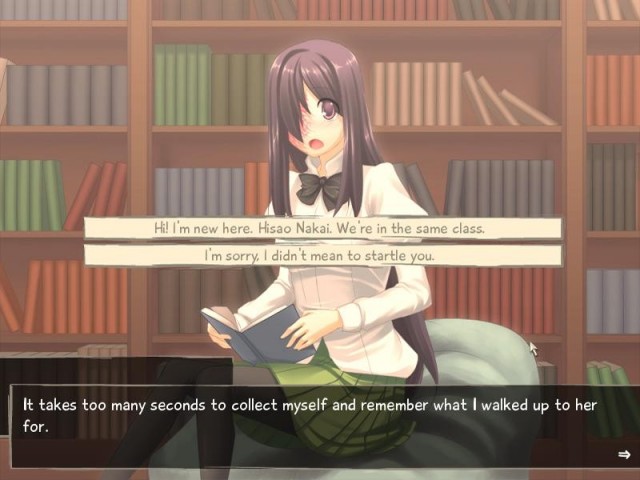 The problem comes when these tropes cease to be tropes and become cliches; staid and stale, no longer used to outline a game but instead used to define it. A tool can break, and unfortunately in the case of ren’ai games, tropes break often in a sexualized genre dominated by games aimed at men. When this happens, it’s the female characters (and the women who like to play these games) who are the ones getting the short end of the stick.

However, the games that do a remarkable job subverting the common tropes are often just that: remarkable. And sometimes for unusual reasons. Like letting you date birds. 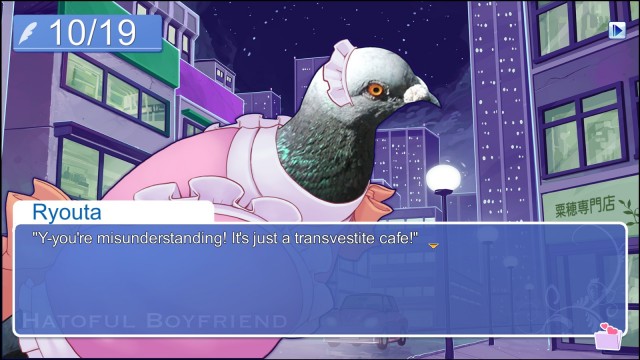 The game starts on the first day of school and you, the oversleeping protagonist, are cruelly awoken, already running late. It’s always the same person: the neighbor you grew up with, who you’ve walked to school with every day of your life, who is like a sibling to you. The girl or the boy next door.

This character is usually the easiest character to form a relationship with, often already crushing on the PC. But it’s mostly only the girls who are specifically domestic: the girl next door who’ll cook you a lunch, who will make sure you get to the nurses’ station, who will stay after school to help you clean up the classroom.

Played Straight: To Heart was one of the first eroge visual novels to make it big and mainstream, with a PC release and even a voice-acted Playstation port. It was made into an anime with the adult elements bleached out, which became one of the more popular harem shows of the late 90s. To Heart’s pink-haired Akari is possibly the most classic example of the Childhood Friend. Though, really, if there’s a trope in a ren’ai game, it probably originated in To Heart.

Subverted: Hatoful Boyfriend is that game that you’ve heard about even if you don’t know what in the world a dating sim or visual novel is, because it’s the game about dating pigeons. While masquerading as a parody of the genre (pigeons!), it’s actually a fantastic ren’ai game, knowingly playing with and subverting tropes up and down while demonstrating a fun story and a lovable cast. Hatoful Boyfriend is an otome game, and you play as the only human in school, Hiyoko. Hiyoko, being a ren’ai protagonist, has a Childhood Friend – the rock-dove Ryouta. But in Hatoful Boyfriend, It’s Hiyoko, the player character, who takes care of sickly, perpetually poor Ryouta. Well, at least until you reach the hidden story (called the Bad Boys’ Love route), which just spends its time deconstructing and reconstructing the game itself. What, you didn’t know that the pigeon dating simulator has a hidden horror-thriller story route? 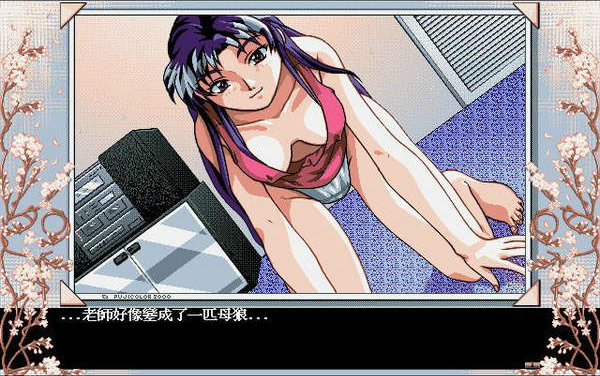 The trope is big in eroge games, and is way more common in those games aimed at men. The whole game might be about the PC figuring out how to land in as many pairs of striped panties as possible. Characters are introduced with shots composed purely for the male gaze – a short skirt from behind or maybe a faceful of boobs. The player characters’ internal dialogues don’t tend to think about the characters that they can have relationships with as any more than their generous physical attributes.

Played Straight: Season of the Sakura was actually the first dating sim I ever played – an eroge from 1997 starring a bunch of girls that DEFINITELY AREN’T rip-offs of popular anime characters like Rei, Misato, and Asuka from Neon Genesis Evangelion, or the girls from Magic Knight Rayearth. Shuji, the player character schoolboy who can do everything perfectly except get with a girl (and swim), is all about figuring out when to make the right move to get to the next base and not at all about having a personality of his own.

Subverted: Katawa Shoujo is a beautiful bishoujo game (of the visual novel flavor) with an odd origin story as the brainchild of 4chan’s Four Leaf Studios. Though technically an eroge, Katawa Shoujo can be played with the option to turn off sex scenes. However, I recommend the game be played with the sex scenes on. The player character, Hisao, a teenager with a serious heart condition, cares more about navigating the foreign community he’s joined by attending a school for the disabled then about having sex with the various interesting and unique girls he meets. Thanks to excellent writing, it means that when the sex happens, it’s meaningful, important and character-driven, not just a means to an end for titillation. 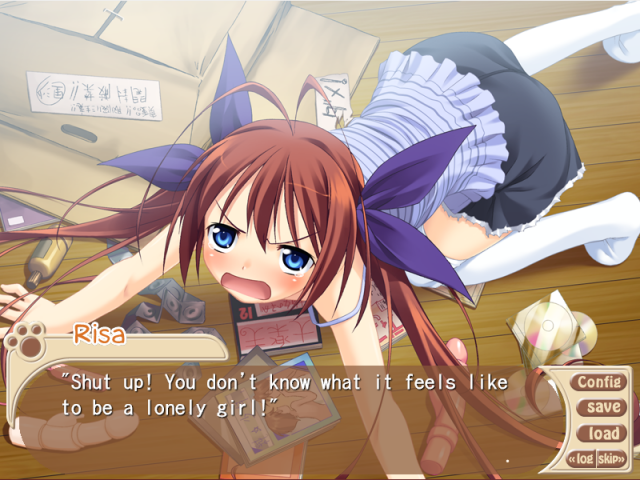 Trope #3: The Girl That Wants Sex

Bishoujo games, particularly eroge, have one hell of a Madonna-Whore Complex. The girl that actively wants to have sex with the PC right off the bat is a glaring demonstration of the eroge’s mixed signals. Unabashedly sexual, she’s the girl that’s easy to get the naughty scenes with, but almost never the girl you end the game with.

She’s the halfway-point girl; often a supporting character who isn’t in serious running to be the Good End of the game, but a quick and easy titillation fix. You don’t have to worry about wooing this character, you don’t have to give her gifts or manage your conversations or tally your relationship points. All you have to do is keep her away from the good girls.

Played Straight:Wanko to Kuraso really should be an adorable, kinky game about Yuuichi, a cynical loner who becomes the unwilling master of a house filled with cat-girls and dog-girls. However, instead of playing around with sub/dom roles and telling the cute story of Yuuichi’s bitter heart being warmed up by his new pets and live-in human roommate, Wanko to Kuraso does everything it can to be SUPER gross. Part of the grossness comes from player character Yuuichi’s treatment of Risa, the human girl who becomes his roommate and fellow pet-owner.

Risa takes a lot of crap during the game, but she gets most of it on account of the fact she would really like to have some sex. This is most glaringly expressed when Risa needs money to rescue an expensive cat-girl who’s being abused. Yuuichi has the money to help out and ends up making a deal with Risa: he’ll pay for the cat-girl in exchange for the rights to Risa’s virginity. Yuuichi claims to have no interest in taking her virginity, so he proceeds to treat Risa as untouchable, not only preventing her from having sex with him (until that route is unlocked, of course), but also preventing her from having sex with anybody else.

Subverted: Somehow, for a game that takes place in a setting inspired by the incredibly misogynistic Joseon era of Korean history, the non-hentai visual novel Analogue: A Hate Story manages to treat sex with more thought and make it more interesting than most hardcore eroge even get close to. Women who like sex and who want to have sex play a huge role in the deconstruction and satire that is Analogue. When you (as the Inspector, the silent protagonist PC) realize that the only thing the mysterious Pale Bride is happy about in her unreliably narrated and sad life is having sex with her arranged husband, your view of the character’s situation undertakes a shift that affects almost every other facet of the plot. The women of Analogue have opinions about sex and aren’t afraid to discuss them.

It’s not all bad news bear-girls, though. While a lot of ren’ai games do turn common tropes into painful cliches, there are games that utilize the genre’s conventions of player agency and character-driven narrative. There’s a multitude of games I haven’t mentioned that use tropes as a common language without being stale or offensive, and there’s a lot of games that are having fun playing with the tropes while keeping the story fresh. 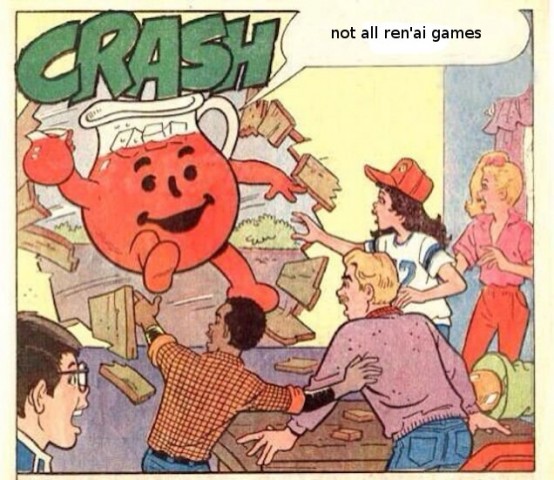 Visual novels, story games and dating sims are easier to create than ever with very accessible engines and tools like Ren’ply, Novelty, and Twine. A whole new generation of developers are making incredible games that keep the absurd, fun, romantic and sexy tone of the ren’ai game intact while doing original and daring things with the genre. It’s a great time to be a ren’ai fan – there’s a lot more to date out there than pigeons and catgirls.