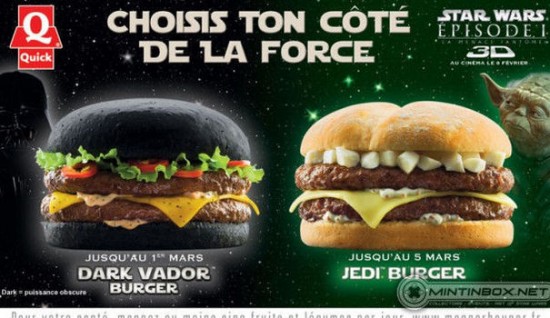 As a promotion for the release of The Phantom Menace in 3D, French-based fast food chain “Quick” is introducing the menacing looking Darth Vader burger, or Sith burger, if you will. It’s also introducing a Jedi burger but that one is just boring. According to this Google Translated source, the Sith burger bun is black due to a dye and not due to the blackness of its soul, different ingredients or concentration of tasty, tasty evil. Curious they called it the Darth Vader burger though. Shouldn’t it be the Darth Maul burger or the Anakin Skywalker burger? Looks like I’m not the only one that prefers the original trilogy.