Amazon The Tick Series Will Be 'Darker, More Grounded' | The Mary Sue 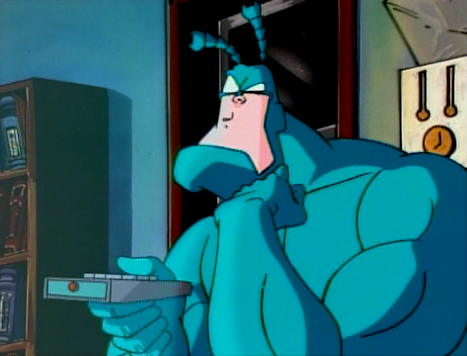 While speaking to Entertainment Weekly this week, The Tick creator Ben Edlund dropped some disconcerting details about the live-action Amazon reboot of the show, saying:

We’ve got this show about superheroes [where] we get to have fun with the idea of superheroes by starting with kind of a comedic parody of [an] event-oriented-like universe. It will be darker and more grounded. And it’s going to have a real story, a real hero’s myth. We’re the ones that get to have fun with it and that’s kind of the situation where right now that’s an open field in this area of entertainment.

Of all the weeks you could use the words “darker” and “grounded” to describe superhero media, this is not the one to do it. I could be projecting here, but I think Dawn of Justice has exhausted a lot of fans’ patience for brooding, serious superheroes; even though I imagine Edlund was just speaking off the cuff and we’re not actually in for a Gritty Tick Reboot, his comments still gave me pause.

My Dawn of Justice hangover aside, I do think a “darker” and “more grounded” Tick wouldn’t necessarily be less funny than the Tick iterations we’ve seen before—if the show kept its self-awareness, I think that could actually be a welcome satirical take on a lot of the self-important superhero media out there right now.

The interview’s focus as a whole was actually “How Amazon’s Tick reboot aims to stand out in a crowded superhero landscape,” and comments from Joe Lewis, head of the Amazon series, shed some more light on the new tone Edlund was describing:

It feels like on one hand you can say the superhero landscape is crowded but I think over the last two decades of it there’s nothing else like The Tick. I feel like it has found this unique place where it’s long existed as a satire and I thought that we had the possibility here to do something really different — something that’s filled with satire but also true to action-comedies and superhero comedies.

I’m still not entirely clear what they’re going for here, but I guess the proof will be in the metaphorical pudding! The fact that so much of the talent working on this Amazon series also helped create the short-lived Fox The Tick show makes me confident that no matter what tone Amazon decides to adopt, this version of The Tick will still stand out from other superhero fare.