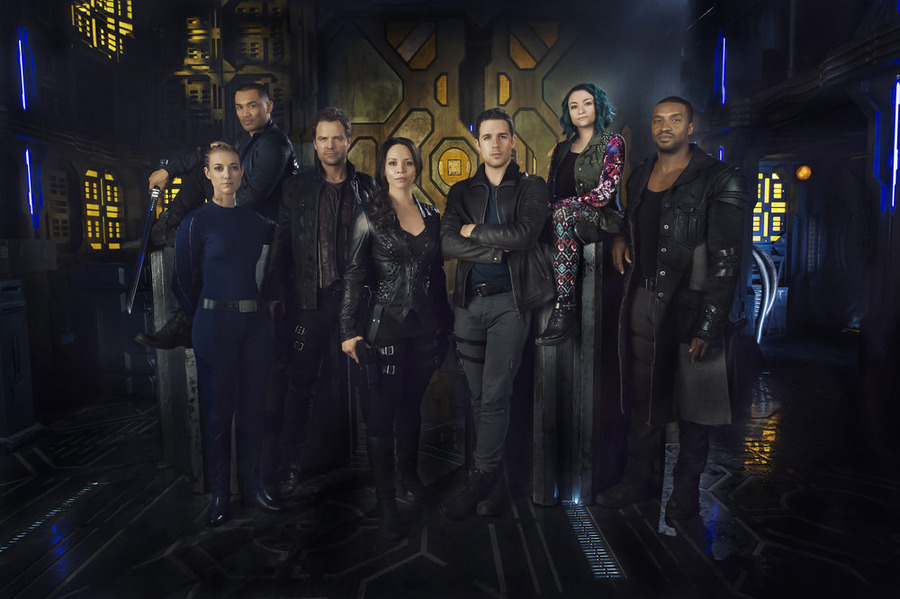 The second I stepped into showrunner and co-creator Joseph Mallozzi’s office and saw the big Cowboy Bebop poster tacked to his wall, I knew that everything was going to be okay. “I love the fact that it has a beginning, a middle, and an end,” he said of the classic anime, “which is basically what I wanted for this show.”

Dark Matter premieres on Syfy and Space tomorrow, and if you’ve read my previous posts about the show, you know I was cautiously optimistic. There’s been a recent dearth of awesome female-focused sci-fi, with shows like Lost Girl and Continuum coming to an end; but Syfy (as part of their promise to return to more sci-fi programming) seemed to be headed in the right direction with upcoming shows like Killjoys, about a lady-led space bounty hunter, and, of course, Dark Matter.

“A refreshing and entertaining space opera,” Dark Matter is based on the 2012 Dark Horse limited comic series of the same name, about the six-member crew of a starship that wakes up from stasis with no idea of who they are or where they’re going. Both the show and the comic are written and created by Stargate (SG-1, Atlantis, and SGU) veterans Mallozzi and Paul Mullie. For those of you blissfully unaware of my extreme nerdiness, I’m probably the biggest Stargate fan ever; I love the original shows for their great throughlines, but mostly for their incredibly-likeable characters (including rad, strong women) and their touch of humor. I firmly believe those qualities are why SG-1 and Atlantis ran for fifteen seasons, and their specific lack is why SGU and BSG clone Caprica failed after just a couple. I was hoping that Dark Matter would be a space opera that didn’t take itself too seriously, or get too dark, at the expense of its characters, its audience, and especially its ladies.

“The women on this show are the ones who usually save the day,” Mallozzi shared with me in his office when I visited their Toronto-based set a few weeks ago. “And we’re thirteen for thirteen on episodes that pass the Bechdel Test.” He proceeded to show me clips from four or five different episodes spread over the course of the upcoming season, the details of which I won’t share, because, spoilers!; but all of which were stand-out scenes for the show’s three leading female characters, cleverness, butt-kicking, humor, and emotion included. Oh, and none of their official character descriptions include the words “beautiful,” “sexy,” or any reference to their appearance at all, actually, which Mallozzi told me was intentional because they didn’t approach the casting of any character with a specific ethnicity or gender in mind. 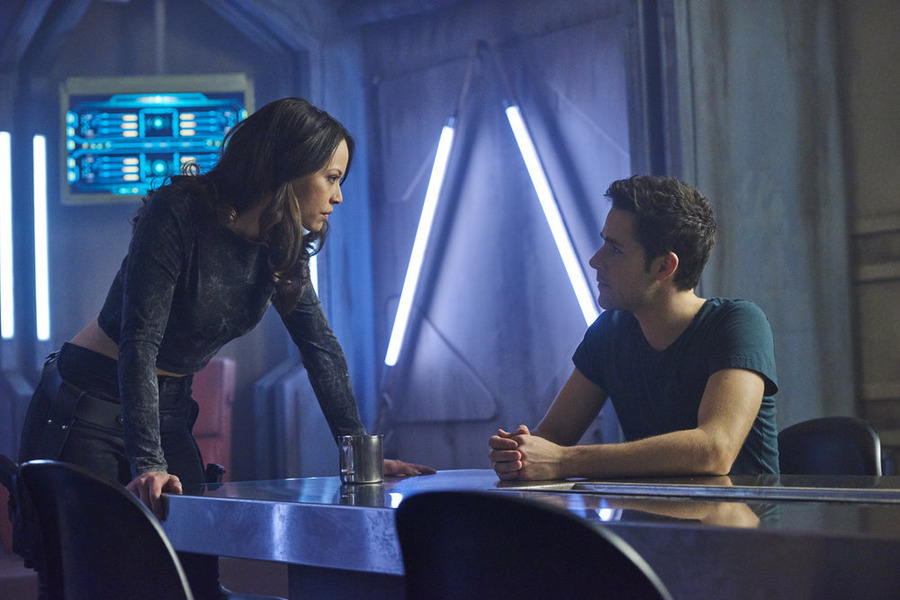 It makes sense, then, that the women on Dark Matter certainly don’t fall prey to the traditional lady tropes in sci-fi. Named for the order in which they were awakened, there’s Two (aka Boss Lady), played by stage actress Melissa O’Neil, the ship’s leader and a fighter who isn’t without compassion. Then there’s Jodelle Ferland (Twilight) as Five (aka Kid), the ship’s young tech guru. Finally, we’ve got Lost Girl‘s Zoie Palmer as The Android, a supremely intelligent, but socially awkward, robot who will not be dressing as Seven of Nine, thank you very much.

“They’re totally kick-ass in totally different ways,” said Mallozzi of the show’s ladies. “Two is our de facto leader; she can out-fight anyone on the show. Five has all the secrets, and everyone takes her for granted, but she’s super capable as well. And The Android has total control of the ship, so basically she’s a super badass.”

Catching O’Neil between shots on one of their last shooting days, she completely agreed with Mallozzi’s assessment of her character. This portion of our interview is probably the best way in which I can describe how cool O’Neil was to chat with about her character:

TMS: So tell me a little bit about your character, Two, because she’s super badass.

O’Neil: Yeah, do you want to see my gun?

TMS: There’s some heft to that. Holy crap, that’s radical.

O’Neil: Yeah it’s crazy. When I’ve got them both going they’re heavy and they just pull my pants down.

Two quickly steps in as ship leader, falling into the boss role despite having no memory of her past position on board. “She’s just this really quick learner,” O’Neil elaborated. “She’s great at fighting – that’s just a part of who she is – and it’s been a lot of fun to get into the skin of a woman who’s so confident and in charge.”

And it’s not all about Two’s prowess as a fighter, either. “It’s her swagger,” clarified O’Neil. “I’m a confident person, but I’m not without my insecurities; and as an actor – actors are always being anybody other than themselves, right? And [Two] is so in her own skin, and it’s nice to try that on and feel what that’s like, and then go home and be like, ‘What did I just do?'” 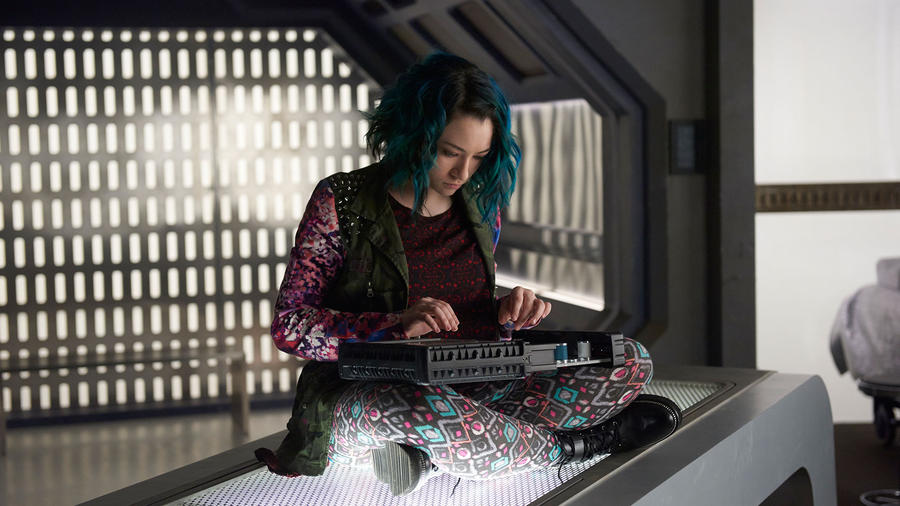 Colourful ship’s mechanic Five might bring to mind another spunky young ship mech, but it’s Ferland’s personality that sets her apart. A self-described geek herself, Ferland has been known to hit up cons in full cosplay, including Oswin Oswald, Luna Lovegood (she still has her hand-made Quibblers) and Ramona Flowers, with which Five’s green hair has really helped. “This is my ideal show, absolutely,” she gushed. “This is my favorite genre of film by far, and being the tech girl is so much fun. Just being on the ship is so much fun! I mean, I watch these kind of shows and it’s like stepping into one, and I feel so lucky.”

Already the youngest member of the crew, Five’s colourful look – very disparate from the rest of the cast – further isolates her from the team dynamic. “She’s bubbly and adorable and geeky and a lot of fun to play,” Ferland explained, “[but] she kind of has some secrets that you don’t find out about until later on, so she’s kind of a mystery character at first. You can tell that she’s a bit off and there are some things that she’s hiding.”

Five has the most interesting relationship with The Android, because in many ways she’s the most childlike member of the crew. “The Android is also kind of innocent and looks at the world the way a child does because she doesn’t quite understand like other adults do,” said Ferland. “She’s incredibly smart, of course. She knows everything about the ship, she’s a genius, she’s a machine, but then you try and explain something simple to her like a joke or a saying and…” she shook her head, laughing. 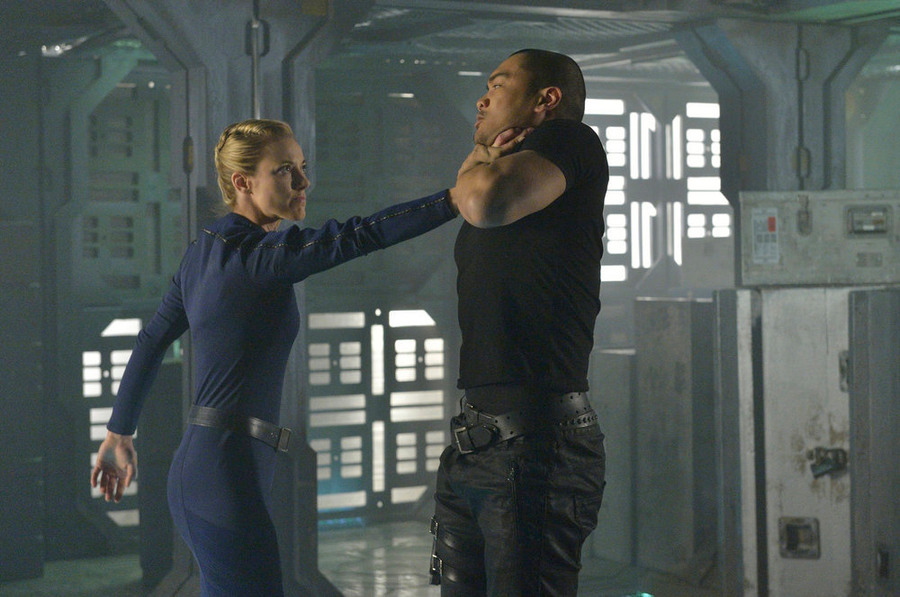 Zoie Palmer as The Android.

“It was really tough for [Palmer],” explained Mallozzi. “You’ve got your standard android characters, and you have certain expectations of an ‘android,’ and on our show we’re dealing with various stages of androids. But she’s essentially a service bot, and one of the ways I described the character in the very beginning was possessed of an almost childlike enthusiasm; less Data, and more like Marvin from Hitchhiker’s Guide. She get jealous, she can get very childish, always reminding people about the type of stuff she’s done.”

Along with the show’s humor, its spaceship setting, and its heavily-serialized nature, ultimately, said Mallozzi, the most important thing about Dark Matter is how people identify with the main cast. “People tune in for the concept, or whatever the hook is, but they stay for the characters,” he said, making me inordinately happy and relieved simultaneously. “It’s all about the characters and their relationships.” And I can already feel myself getting attached.

Dark Matter premieres tomorrow, June 12, at 10pm on Syfy in the US and on Space in Canada.