Rumor: What Anne Hathaway’s Catwoman Costume Will Look Like Chalk this one up to the Rumor Mill, which I can only assume grinds salt into grains, for all the times I have to tell people to take their rumors with them, but the facts as they stand are:

Hollywood Life says an “insider” has given them the scoop on the Catwoman costume of Christopher Nolan‘s The Dark Knight Rises, but Hollywood Life’s own trustworthyness as a source of Batman knowledge is put into question almost immediately by their title “Anne Hathaway’s ‘Catwoman’ Costume Revealed: It’s Less Like Halle Berry’s & More Like The Original Comic Book!” because first, “original comic book” means nothing where any Pre-Crisis characters is concerned, least of all one with as many costume changes as Catwoman, and, second, why would you even mention Halle Berry why why why.

Well, fine, what does your “insider” say?

“Anne’s outfit is more tactical, like the comic book, than the previous Batman movies,” a source very close to the costume design tells us exclusively. “She will definitely be wearing the goggles and it’s going to be less sexy than Halle Berry and Michelle Pfeiffer’s Catwoman costumes. She’s going to look more like a robber.”

The goggles, in this case, undoubtedly refer to the Darwyn Cooke 2001 redesign of the character to a black catsuit (not a pun) whose zipper is a great barometer for the dedication of an artist to drawing women without sexually objectifying them, a cowl with stylized ears and a big old pair of catseye night-vision goggles: 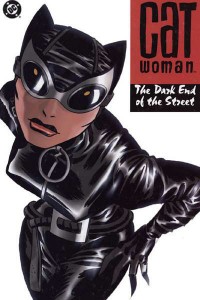 While this is by no means confirmation of Hathaway’s costume (and when are we going to get it, Mr. Nolan? Come on, we got Bane like a whole month ago), Nolan’s realistic Batman movies that shun the supernatural and super-scientific aspects of its setting seem like they would naturally gravitate to the current Catwoman costume.