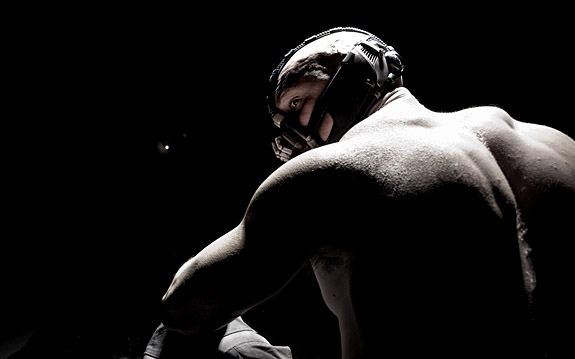 Ahh, I love the smell of fresh viral marketing in the morning. And nobody does viral marketing like the most recent Batman trilogy (except… maybe Valve). And what a bang of a beginning! With the launching of thedarkknightrises.com, and a little applied internet science, we have our first look at Tom Hardy as Bane, a shirtless, shornheaded, solid block of muscle with what we can only assume is a genius intellect behind that freaky-ass mask.

But as you may have already noticed, the only thing on thedarkknightrises.com is some freaky-ass chanting. Allow us to explain.

According to MTV Splashpage:

The folks at Superherohype did science to the chanting recording, and discovered that says “#thefirerises” in spectrum. The hashtag led everyone to Twitter, where @thefirerises is sitting around and for every follower it gets, it tweets out another image. The user pictures of its followers are being used to create a photomosaic of the image above, the more followers, the more tiles revealed.

Of course, then forumgoers did some more science to the site, and uncovered the un-mosaiced image, a large version of which may be found here.

So follow away, twitterers. Who knows what will happen when the mosaic is actually completed.