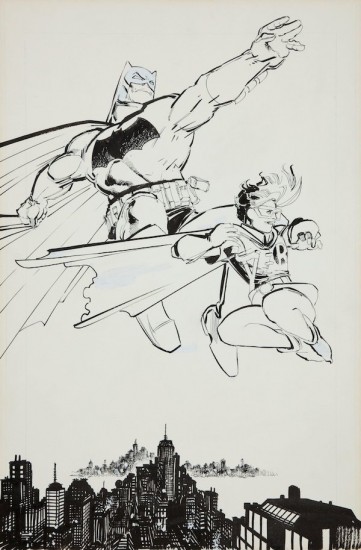 Entire issues of comics have broken the $1 million mark in private auctions within the last couple years, but the money involved in the buying and selling of original comic art is somewhat less lucrative. But that didn’t keep this page from The Dark Knight Returns from setting a new record for the going price of a piece of original American comic artwork this week.

The splash page of an elderly Batman and Carrie Kelley, the first female character to ever be a Robin, was appraised at a value of $100,000, but when the auction dust settled two days ago the winning bid was, in fact, $448,125. This puts it not just a little, but quite a bit more expensive than the previous record holder (the original art for the cover of Weird Fantasy #29), which went for $380,000 last year.

Artist Frank Miller‘s take on it?

I’ve always loved that drawing. Danced around my studio like a fool when I drew it. I hope it finds a good home.

I can’t say I don’t have my problems with Miller’s body of work in its entire, but it’s still must be pretty cool to have one of your drawings fetch a couple times some yearly salaries… more than the last record-holder.