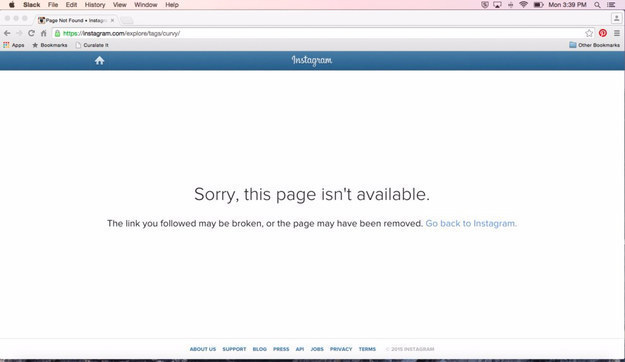 Instagram recently added the word “curvy” to their list of banned words. This means that if you search “curvy” nothing will appear, similar to curse words, swear words, and other types of hashtags that Instagram feels is inappropriate or offensive (variations of curvy, “curvygirl” or “curvyfashion,” however, are ok). The reason? Buzzfeed tells us “it was being used to share images and videos that violated Instagram’s community guidelines around nudity.” I can see where Instagram is coming from, but there are some issues here, or like, a lot of issues.

However, some awesome women are now fighting back against the ban by posting images with the hashtag #Curvee to celebrate body-positivity.

How ridiculous to ban #curvy* on Instagram! Love the #curvee movement. A photo posted by She Might Be Loved (@georginagrogan_) on Jul 16, 2015 at 8:59am PDT

The #Curvee hashtag is a great movement of body-positivity and Instagram should really take note. There needs to be more positive representations of plus-sized women and banning “curvy” Instagram perpetuates a lot of fat-shaming, whether they mean to or not. Also, as much as I love these movements and the discussions that come from them, it’s really frustrating that they’re so often responses to offensive acts like Instagram bans. What do you think about #Curvee?