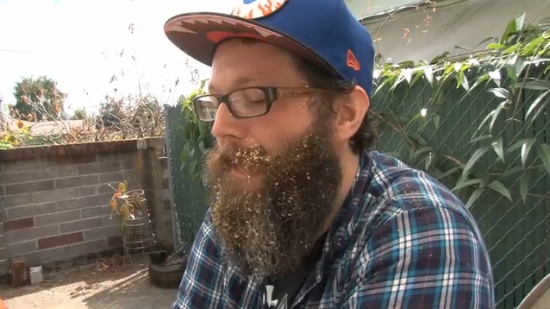 If you follow Geekosystem, you’ll know we have an alternate identity: Beardosystem. We tend to cover all things beard from time to time, so we couldn’t pass up the chance to let you in on Kickstarter project Crumb Catcher, which is an iOS game where the object is to make your beard disgusting.

From the crop of now-embedded-into-our-gaming-psyche casual mobile games, Crumb Catcher is a simple game wherein the player must explode food into illustrious beards, beating the level by achieving a percentage of crumb coverage set for each level.

Created by Beardo Games, Crumb Catcher is the result of founders Miles Neilsen and Chris Harback sporting some pretty hefty beards, and wanting to turn the pain of trying to eat anything while having such a beard into something more pleasurable than the hell it actually is. In Crumb Catcher, the player will be have to make a choice between various food items in order to create the most perfect crumb-creating dish, then explode it all onto the player’s beard for maximum crumb coverage.

Though the game is of the mobile casual variety, it’s more complex than just busting meals on a face, as each player character has different food affinities, which creates more crumbs, and the game sports arcade and story mode to start. Story mode, amazingly, “tells the story of beards through the ages, from Cavemen to the present day.” Seriously, that sounds like an instant purchase for this oft-bearded gamer, however tame my beard is by comparison. The game also features a variety of bearded characters, from a rugged lumberjack, to Abe Lincoln’s tasteful facial hair.

As always, since the project is on Kickstarter, there are some sweet rewards for pledging a higher amount of money, including a copy of the game, codes to unlock secret characters, clothing featuring game art, or even your face in the game. The project only has 3 days left to go, and needs around $3,000 more at the time of this post to hit its goal — and, come on, exploding food onto beards sounds more fun than slicing fruit, cutting ropes, and murdering birds by slinging them into wood and concrete walls, right?

Check out the Kickstarter page here, and prepare your beard.