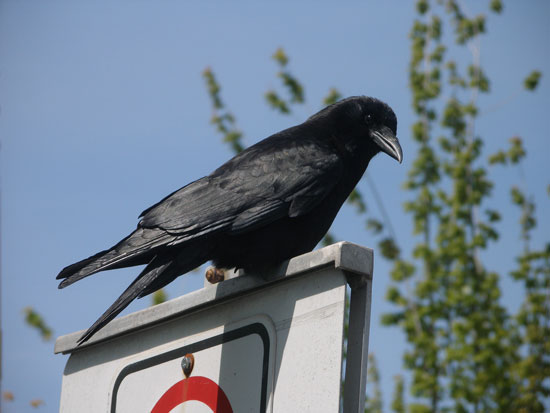 Crows are already regarded as remarkably intelligent birds, having been the first feathered creatures to independently discover the art of snowboarding. However, a new study from the University of Vienna suggests that crows can tell the difference between humans by their voice alone — and what’s more, they seem to remember us.

The Vienna study was described in a recent research paper by Claudia A. F. Wascher, Georgine Szipl, Markus Boeckle, and Anna Wilkinson published in the journal Animal Cognition. In the experiment, researchers used a group of carrion crows living in the university’s aviary. They began by recording the voices of people who worked with the birds saying the word “hey,” and also recording strangers saying the same word.

When the recordings were played back, the birds showed acute interest to the strangers’ voices, but not the voices of people whom the birds had already met. The researchers took this to mean that the birds remembered the familiar voices, and investigated the voices of strangers — presumably because unfamiliar humans are possible threats.

Interestingly, when the researchers repeated the experiment with the calls of familiar and unfamiliar birds, the crows did the opposite. In this case, the crows paid more attention to the familiar bird calls and ignored the unfamiliar ones. This, the researchers believe, supports previous studies that suggested crows work cooperatively with some birds for mutual gain, but ignore others.

Though interesting, the results of the experiment should not be too surprising. A few years ago, scientists found that crows could not only remember human faces, but also seemed to hold grudges against people that had been mean to them. What’s more, further studies showed that crows seemed to teach these grudges to other birds.

Just another piece of research that makes Hitchcock’s The Birds seem just a little too close to reality.

(via Physorg, image via Thomas Quine)