Parrots Can Teach Other Parrots How To Talk, Curse Our Names Behind Our Backs 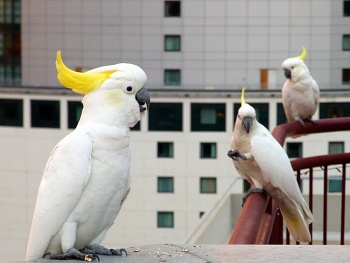 Recently, the Australian Museum’s Search and Discover desk has been getting a lot of calls from people who claim to be hearing voices out in the wild. Now, while any number of these people may actually be going insane, at least some of them are not and are actually hearing wild cockatoos just chatting it up.

How did these wild cockatoos learn how to talk? Other previously domesticated cockatoos taught them. According to Martyn Robinson, a naturalist who works at the desk getting all these calls, cockatoos and other parrots that have learned to talk in captivity can actually teach the trick to other wild birds if they survive long enough to join a flock. Presumably, parrots who know the trick can also teach it to their kids. Of course, knowing that parrots also name their young, we probably shouldn’t be entirely surprised.

When you give it some thought, it makes perfect sense. If a parrot is smart enough to mimic human speech, why shouldn’t it be smart enough to mimic a parrot mimicking human speech? Aside from just being neat though, this revelation doesn’t really affect anything in a big way. While being able to talk does make it easier for the parrots to talk smack about us when we aren’t around, there’s no evidence to suggest they can do anything but play a game of telephone with what they’ve heard us say, and no parrot has ever heard me talking about how stupid mankind is. Definitely not.

Perhaps the most interesting effect of this is that in large Australian cities, the cockatoos keep their vocabulary sharp through frequent interactions with humans. As a result, apparently, if you say hello to a crowd of cockatoos, it’s not unlikely that you’ll get a relatively articulate answer. Granted, its still a far cry from the Planet of the Apes (or cockatoos) but it’s still kind of weird, even if it is in an amusing sort of way…for now.

(Australian Geographic via The Escapist)