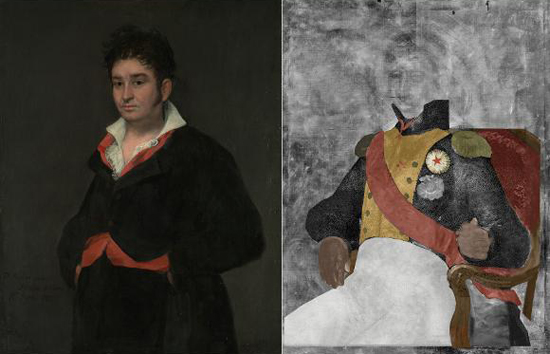 The use of X-ray analysis is changing the face of art, and there can be no better example than the recent discovery that a painting by Francisco Goya hanging in the Rijksmuseum originally had a different subject. The Portrait of Don Ramón Satué, which shows a casual and rather dashing Spanish judge, apparently covered the seated portrait of a high-ranking member of the French military — possibly the brother of Napoleon Bonaparte.

The incredible discovery was made using Scanning Macro X-ray Fluorescence Spectrometry. This technique fires high-energy x-rays at the painting, which energizes the atoms causing them to release their own x-rays. By observing and analyzing this information, researchers are able to develop a color map of what lies beneath the top layer of paint. The resulting map, above and on the right, shows remarkable detail about what was originally on the canvas.

However, it’s still something of a mystery as to who was on the canvas prior to Satué. Historians have concluded that based off the attire of the seated man, the subject is almost certainly part of the French military. Moreover, because of the unique medal on the uniform, the subject is among the highest order of military leadership. According to the BBC, only 15 French generals plus Napoleon Bonaparte’s own brother were authorized to wear the uniform. Unfortunately, the face of the sitter is so obscured that, for now, he remains anonymous to history.

As to why Goya would have painted a French military leader in the first place, we have to look back to a curious chapter in Spanish history where Joseph Bonaparte — Napoleon’s brother — was installed as the King of Spain. This is all tied up in the Peninsular War, but the important point is that the French never really secured their control of Spain. Though Joseph’s reign lasted only five and a half years, that was long enough for Goya to make the original painting. After Joseph abdicated the throne in 1813, Goya was again the court artist of the Spanish crown. He painted judge Satué in 1823, and may have recycled the canvas in an effort to distance himself from the diposed French king.

The X-ray technology used to reveal this lost treasure will certainly have other museums wondering what unseen gems their collections may contain. Here’s hoping more unknown works will soon be found.

(BBC, image and story via Rijksmuseum)