Lost Michelangelo Painting May Have Been Discovered in Buffalo, NY Living Room 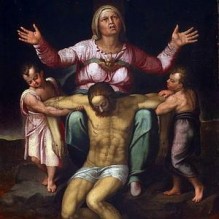 One Buffalo, New York family, the Kobers, had for years passed on a painting which they called “The Mike”: Family lore had persisted that this painting depicting Mary and Jesus was a real Michelangelo. After Air Force Lt. Col. Martin Kober retired in 2003, he decided to research this rumor: To his and the family’s surprise, one Italian art appraiser, backed up by scientific analysis, says that this painting could be a lost Michelangelo painting worth millions.

[Italian art historian Antonio Forcellino said that] “In reality, this painting was even more beautiful than the versions hanging in Rome and Florence. The truth was this painting was much better than the ones they had. I had visions of telling them that there was this crazy guy in America telling everyone he had a Michelangelo at home …

Forcellino told The Post that infrared and X-ray examinations of the painting — on a 25-by- 19-inch wood panel — show many alterations made by the artist as he changed his mind, and an unfinished portion near the Madonna’s right knee.

“The evidence of unfinished portions demonstrate that this painting never, never, never could be a copy of another painting,” Forcellino said. “No patron pays in the Renaissance for an unfinished copy.”

Additionally, the provenance, or ownership history, points to the work being done by Michelangelo around 1545 for his friend Vittoria Colonna. That was about 45 years after Michelangelo did his famed “Pieta,” or pity, sculpture of Mary holding Jesus, housed in St. Peter’s Basilica.

Per Forcellino’s account, the painting was passed from Colonna to two cardinals on to a German baroness, who in turn willed it to her lady-in-waiting, who was “the sister-in-law of Kober’s great-grandfather,” who sent it to America in 1883. At that, the painting’s veracity can’t be confirmed. If art experts conclude that it’s a genuine Michelangelo, however, it could be worth many millions of dollars.