Crime-Fighting Superheroes In Michigan Split Up Over Irreconcilable Differences 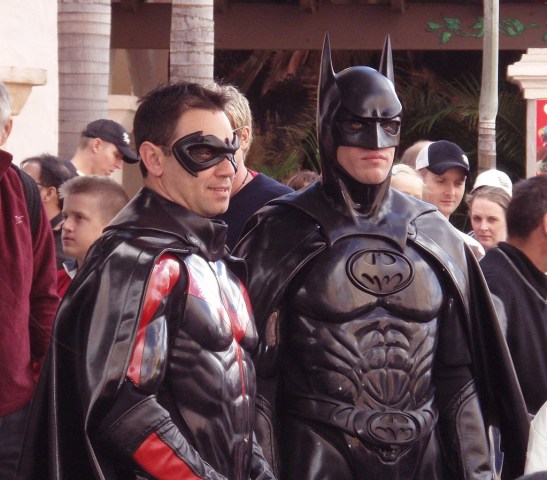 It might be colder than previously thought possible in Michigan, but that doesn’t stop a group of masked men from dressing up in tights and trying to save the world. Well okay, they’re not really a group anymore, because the one who calls himself Batman got mad at the leader of the group and the two divided everyone with their crappy attitudes.

According to The Detroit News, the Michigan Protectors originally consisted of 12 members but has since divided into two factions because of an ongoing feud between Mark Williams, aka “Petoskey Batman” (Petoskey is a city in Michigan, for those of you playing at home), and Adam Besso, who goes by the moniker “Bee Sting.” Petoskey Batman originally worked solo until he was arrested in 2011 for “disturbing the peace” after being chased to the roof of a hardware store by a bunch of drunks he was trying to make disperse, and when the story made headlines, Bee Sting invited him to be a part of his superhero patrol.

Then Bee Sting was sent to jail for 102 days in 2012, and when he got out, some of the patrol members decided that they’d rather have Batman running things over Bee Sting. The disagreements between the two men eventually escalated over personal attacks, alleged welfare fraud, and misuse of charity money. At one point Petoskey Batman even called Bee Sting out for bringing a gun on patrol, which, let’s be fair, is totally something the real Batman would do. Now they are sworn arch enemies.

“We were brothers,” Williams said to The Detroit News.  “I loved him as much as I love my own blood family.” But now? “He is an abusive, neglectful, thieving, boastful, cowardly crook. He belongs in jail and I will see him there. […] I will scream from the rooftops until Bee Sting is shown for what he truly is.”

Besso was less eloquent, but a little more literary. “[Williams] has to tear others down to feel better about himself,” he said. “He’s like Lord of the Flies with a slightly better version of dirt bags.”

Time will tell if this ongoing feud erupts in an all-out war that irrevocably changes the city of Detroit forever, or if one of them gets punched by another drunk person while on patrol and they all get arrested for disorderly conduct. Most likely the latter.

(via The Detroit News, image via Dave Keeshan)