Double Trouble: Bees Also Have A Paralyzing Bite To Deal With Intruders 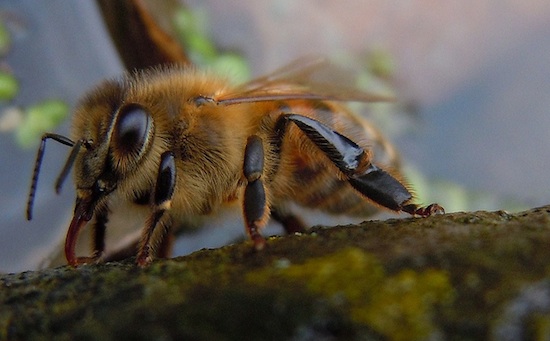 Though they’re one of the world’s most infamously well-armed insects, it turns out bees have only been turning half of their armory on us all these years. In addition to their famously venomous stingers, bees have a bite that delivers a paralyzing toxin to their victims, and researchers in Greece think the poison could one day be repurposed as a local anesthetic for humans.

The poison the bees use, 2-heptanone (2-H) is no mystery to science — it occurs naturally in some foods, such as beer and white bread, and is known to be secreted by some insects. Until this research, though, it was though that 2-H was a signaling molecule of some sort, though. A paper published in the online journal PLoS ONE , though, shows that 2-H acts as a paralytic poison when secreted though bees mandibles, though.

Researchers at Aristotle University of Thessaloniki made the discovery mostly by accident while studying wax moths, an invading insect that can damage bee colonies and honeycombs. Bees appear to use their poisonous bite as a weapon of first resort when dealing with wax moths and other small hive invaders, such as mites, which are not dangerous enough to be eliminated by the the bee’s stinger, but have to be dealt with before they can harm the hive.

Bees bite these invaders, releasing 2-H through their mandibles, which paralyzes the moths and mites. The non-fatal bites can keep the bugs out of commission for up to nine minutes, during which the bees act as bouncers, ejecting the troublesome pests from their hives. The next step in research is taking a look at the safety and clinical properties of the 2-H molecule in animals, which could eventually set the stage for it to be used to numb pain in humans.