Photosynthesizing Bugs Can Channel the Power of the Sun 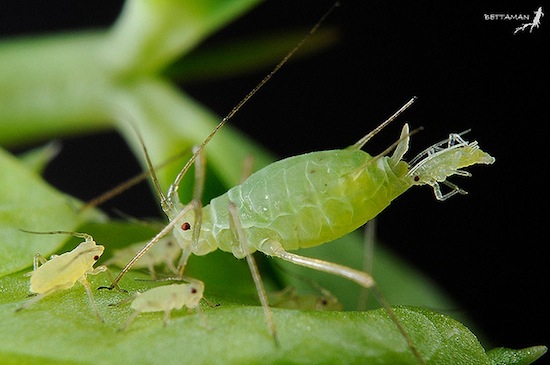 A new study has revealed that the pea aphid may be the only type of animal to use photosynthesis to collect and store energy. Alain Robichon, an entomologist from the Sophia Agrobiotech Institute in Sophia Antipolis, France, built his research on the findings of Nancy Moran; she discovered that the aphids had the gene to produce carotenoids in the first place. The pea aphid was already among nature’s oddest creatures for a bunch of reasons. For example, did you know they can be born pregnant?

For those of you who’ve forgotten your middle school biology, photosynthesis is the process plants use to turn sunlight into energy. Carotenoids, a pigment which plays a vital role in the process, are what makes leaves green. Like plants, aphids also use carotenoids to turn light into usable energy.

As a result of their photosynthesizing habits, aphids born into different situations end up being different colors. When energy is plentiful, they turn orange. When they’re in colder environments, they turn green. When there are overpopulation issues or resources are tight, they turn white. They’re like a color-coded map of energy issues.

Robichon’s study does not, however, explain why aphids create energy using sunlight. Aphids get more than enough energy through their diet, according to insect geneticist Nancy Moran. Co-author Maria Capovilla thinks the photosynthesized energy may just be an emergency backup, making it significantly less cool.

Surely it won’t be long until someone uses aphid DNA to figure out how to turn folks into Superman, right? Right.

(via Nature, image credit via Bettaman)