This Monday, the Creation Museum in Kentucky will be revealing a fossil of Allosaurus fragilis that the institute claims is evidence of a Biblical flood. But c’mon, Ken Ham, how could Noah have forgotten to put dinosaurs on the ark? The dude packed mosquitoes. I think we should give him a little more credit.

The Allosaurus skeleton has been given the unfortunate name of Ebeneezer, is 30 feet long, and according to the Museum’s blog, looks like a “T.rex, only smaller.” (All dinosaurs are only as interesting as they are comparable to T-Rex.)  Ebeneezer was allegedly found in Colorado in 2002, and Answers in Genesis’ geologist Andrew Snelling says the fossil is significant to the museum “for a few major reasons. It was found with its bones arranged in their correct anatomical positions relative to each other, rather than in a scattered assortment of bones as is often the case.”

Ebeneezer’s vertebrae, tail and most of his head were reportedly found intact, which Snelling says indicates rapid burial — ergo, definitive proof that the Allosaurus perished in a Biblical flash flood. 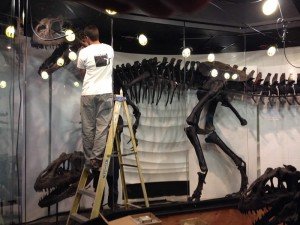 “Let’s Night at the Museum the shit out of this place, guys!”

Judging from a message on the Museum’s website, Ken Ham is obviously excited for the new acquisition to start spreading “the truth about dinosaurs” and fossils and one-upping the specimens displayed at non-creationist institutions.

[Ebenezer] fulfills a dream I’ve had for quite some time. For decades I’ve walked through many leading secular museums, like the Smithsonian in Washington, D.C., and have seen their impressive dinosaur skeletons, but they were used for evolution. Now we have one of that class for our museum […] While evolutionists use dinosaurs more than anything to promote their worldview, especially to young students, our museum uses dinosaurs to help tell the account of history according to the Bible. This remarkable allosaur is a great addition to our dinosaur exhibits.

The Creation Museum offers free tickets for children under 12 and will be unveiling their dubious “proof” of Noah’s flood this Memorial Day. Here’s hoping that the  only “truth about dinosaurs” impressionable kids are left with is their extreme awesomeness, and not lazy archeological analysis serving a religious agenda.

(via io9, image via Creation Museum)