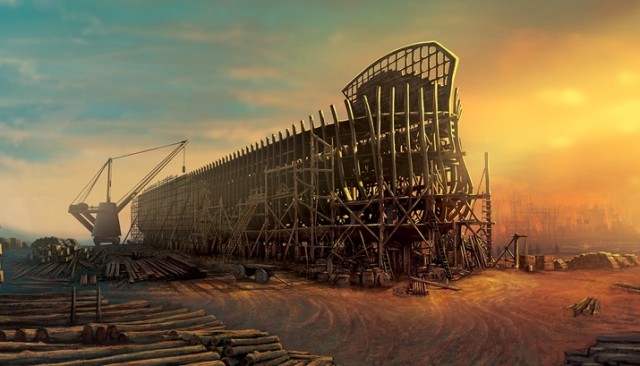 Ken Ham, founder of Kentucky’s Creation Museum, will be using municipal bonds he was given after his February 4th debate with Our Friend Bill Nye to build a giant ark complete with live animals. It’s a waste of money so enormous–501 feet long, in fact–that hopefully its construction will just discredit Ham further.

Bill Nye stated that he is “heartbroken and sickened for the Commonwealth of Kentucky”after Ham announced on Thursday that the city of Williamstown, about 40 miles outside Cincinnati, would help fund the “Ark Encounter” . Originally pitched in 2010 as a $150 million theme park joint project between Ham’s museum and his ministry, Answers in Genesis, Ham says renewed publicity after the debate finally gave him the financial freedom to move ahead with the ambitious project.

Vice president of Answers in Genesis Mark Looy says the bond is less than $62 million, and will barely allow developers to recreate a “life size” “historically accurate” Ark.

Reportedly the vessel will be “authentically” built with straight-sawed beams and wooden pegs instead of nails–so the ark may wind up holding more water than Ham’s ideas.

The attraction will also offer both live and animatronic animals when appropriate.

The Guardian claimed that when Nye was asked if he expected criticism for inadvertently enabling construction, he replied “Me? I’ve always been criticized,” which is a pretty badass non-answer.

Nye repeated his dismay for the people Ham’s project would affect, saying “voters and taxpayers in Kentucky will eventually see that this is not in their best interest.” We’ll go so far as to say it’s in nobody’s interest but Ham and the people who work for him.

Personally, the disconcerting aspect of this project isn’t just that it’s a waste of money and it propagates ideas that we don’t personally prescribe to. Just because Answers in Genesis is a church doesn’t necessarily mean they should put all their money and time into charity, but the use of a municipal bond to build a theme park designed to promote creationism is a disconcerting blurring of church and state.

However, as I said, I suspect that this ambitious project will wind up just becoming a white elephant for Ham (or two white elephants in this case, I guess.)

Recent incarnations of the story of Noah, including but not limited to Evan Almighty, have been critical and financial failures. Ham’s project may be destined for similarly choppy seas.

(via The Guardian, image via Ark Encounter)