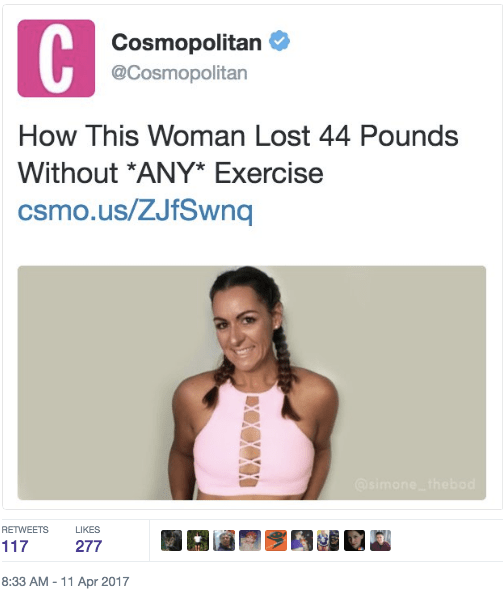 While Cosmopolitan does their share of in-depth, capital-j Journalism, the outlet is still primarily known for sex tips, personality quizzes, and weight loss/exercise/diet tips. So that headline up there isn’t unusual. What is unusual, as well as disgustingly insensitive, is what that woman’s weight-loss trick turned out to be.

That’s right, ladies! You, too, can lose a ton of weight without *ANY* exercise, and all you have to do is suffer horrible medical traumas.

[whispers into the wind] she had a rare form of cancer https://t.co/9cPiBsRpCe pic.twitter.com/fu4fXAMZBC

[cw weight] I shit you not, answer is she had cancer, several organs removed, mental illness and chronic pain. Cosmo put it down to a diet. pic.twitter.com/CAxURU5kjT

UNITED: “Yeesh, what a week”
COSMO: “Hold my beer and watch this” https://t.co/FtHw6TitOl

They’ve since changed the headline to read “A Serious Health Scare Helped Me Love My Body More Than Ever.” That doesn’t change the fact that the article tracks Simone Harbinson’s struggles with cancer, PTSD, and more, all culminating in what appears to be an ad for a dietary weight-loss program called The Bod. Simone couldn’t exercise because of her medical issues, so she had to pay for this “12-week diet program.” The piece is full of Instagram posts linking to the program, complete with her specific discount code.

What a terrifically simple weight-loss plan! All you have to do is get diagnosed with cancer, get a kidney infection and PTSD, suffer from complications from surgery, then pay a ton of money for an Instagram diet program. Thanks, Cosmo!