In Addition to Everything Else, Corey Feldman Is Replying To YouTube Comments Now 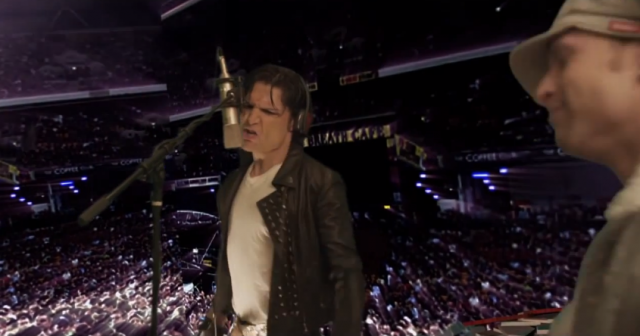 Corey Feldman is going through some stuff right now, it would seem. There was the beautifully sarcastic VICE coverage of his ridiculous birthday that he himself approved and promptly got way too mad about. Then there’s the music video he put out last month, which is only now getting traction online. I think you all just need to see it. Really.

Intended to be a “day in the life” of Feldman as he takes you through his “Feldmansion” (okay, that’s a pretty decent pun, I’ll give you that) full of scantily clad women whom he pays to hang out with him, the video for “Ascension Millennium” is… odd, to put it generously. Sean Astin also makes a cameo, because I guess Feldman has some kind of dirt on him from back in their Goonies days.

Is this concerning? Yes, extremely. Like, to the point where now I’m pretty convinced that Tommy Wiseau has been Corey Feldman from the future all along and we’re watching his metamorphosis in real time. But it’s still not as concerning as the fact that while we weren’t looking, Corey also decided that responding to the comments on the Youtube page for the video is an appropriate thing for him to be doing:

No. Noooo, Corey. Don’t start correcting people on the Internet. It starts out innocently enough — somebody uses the possessive “your” instead of the contraction in a sentence or tells you something about your music video that you know to be untrue, and you think you’re helping them learn something new. Next thing you know, you ‘re being told that you don’t know anything about the U.S. Constitution by a thirteen-year-old kid from Nebraska who thinks he’s a vampire, and you find yourself deliberately trying to make that kid cry as retaliation. Nobody wins, man.

For the record, there is definitely a guitar in the song, but it seems to have been sound mixed into oblivion so you can barely hear it over Feldman’s autotuned vocals. Or rather, Feldman’s vocalized autotune. It’s more machine now than man, .

It doesn’t seem as if anybody has jumped on the comments section now that the video is starting to go viral in earnest, but for all our sakes, I really hope Feldman doesn’t take the inevitable bait when it manifests. Just turn off the internet at the Feldmansion for a while, pal. You seem to be having fun without it already.