It’s All Connected, People! Our Theory on the Pronunciation Book Mystery

Don't worry, it's not about Half-Life 3.

The Internet has been following a YouTube series that started out as a pronunciation guide, became a slightly weirder pronunciation guide, and went off the rails two weeks ago and started a portentous countdown. Theories have been springing up, but any evidence you derive from interpreting Bob Dylan lyrics isn’t exactly reliable. What if they’re entirely off the mark?

The current most popular theory? It’s a viral countdown to a new Battlestar Galactica announcement of some kind. It’s weird stuff, but I’m skeptical that the people working on the rumored BSG project would do this sort of thing — though Bryan Singer, who’s publicly attached to the Battlestar Galactica movie in production, did direct The Usual Suspects, so it’s hard to say definitively.

Having once spent hours trying to puzzle out a Lost alternate reality game that turned out to be a hoax, to say nothing of the show’s actual ARGs, I’m not sure I want to get into this. And yet here I am, sucked into the mystery. But while there are some things you could tie to BSG (“Those five people look familiar.” did have me thinking of the Final Five), I would actually speculate in another direction. If we assume this is related to some commercial project from a known creator in the first place, then here’s my theory that’s simultaneously more and less crazy than The Daily Dot’s. Who’s known for doing weird ARGs, has a major project coming soon, loves mythology and numerology references, and like the Pronunciation Book messages, has a main character known as ‘Chief’? That’s right… [dramatic pause]

Bungie. The game developer has its first non-Halo game in forever, an ambitious sci-fi epic called Destiny that’s the beginning of a series, coming out next year. They’re famously obsessed with the number 7, and the countdown started with 77 days left. They’re also no stranger to weird ARGs with Halo 2‘s “I Love Bees” and Halo 3‘s “Iris.” A few people have guessed at Halo based on the frequent use of ‘Chief’ in the videos even before the countdown began, but I think this deserves the in-depth look that the BSG theory is getting.

The Escape: You could interpret “Please help me escape from this place. I need your help with something, Chief.” as Bungie’s escape from being stuck at Microsoft making more and more Halo games. The same goes for “You can’t understand what it’s like to be stuck here,” and “I don’t care what Chief said. You are going to complete this assignment.” And “I have no choice but to complete the mission.” echoes Halo 3’s famous “Finish the fight” tagline. Now that Bungie is ‘awake’, they’re working to build something even greater.

The Heroes: Day 67: “We were young heroes, gorgeous liars.” This and many other lines from the countdown and earlier videos are about “young heroes” and a vague, futile conflict, and many point to a squad of soldiers on a reconnaissance mission. Bungie loves ‘eternal hero’ myths as seen in this bit of Marathon trivia. Destiny will feature a dynamic shared world between players, who are survivors of ‘The Collapse’ that destroyed humanity’s space colonies (a commonality with Battlestar, so there we go) and are appointed ‘Guardians’ of the City who explore a vast unknown world.

In particular, Michael Moorcock’s Eternal Champion mythos is popular at Bungie, and Moorcock’s eight-arrow Symbol of Chaos has been used as an emblem in ODST. It’s also evoked by the Bungie Septagon logo, which features six columns supported by a lone seventh, a nod to Bungie’s fan community. A single arrow is Moorcock’s symbol of law, so Bungie balances order and chaos. Destiny‘s logo is a three-ended symbol that resembles Bungie’s Septagon.

In addition, Destiny has three character classes: The Titan, the Hunter, and the Warlock. The Titan is a futuristic soldier like the ‘space marine’ that Bungie has relied on in the past, and this could tie into the Pronunciation Book’s squad and their mysterious mission. The straight-laced, conventional soldier would be Order. Meanwhile, the Hunter is inspired by the Wild West outlaw or bounty hunter, which gives us Chaos. The Warlock is a ‘space wizard’ with special powers, which would fall into something in between order and chaos.

One video pronounces the colors of the rainbow, red, orange, yellow, green, blue, indigo, violet. Seven colors, the number seven again. It adds that “The indigo triangles are a warning,” which points to favoring groups of three as well as seven, just like Destiny has done for Bungie. Another video says “You know what, you’re right, the indigo carpet does look better.” The color indigo shows up in New Age concepts such as indigo children. The player characters of Destiny, especially the Warlocks, will be ’empowered’ by the Traveler with supernatural abilities just like the ‘indigo child’ theories attribute paranormal gifts to them. Hence the focus on the “young heroes” of Pronunciation Book.

“When the assault became unbearable, Glyph used his aegis to shield our party.” Doesn’t this sound a lot like a defensive ability in a video game? Aegis is of course a divine shielding force from Greek mythology. The name ‘Glyph’ might identify him as a Warlock using a power granted by the godlike Traveler.

The ‘characters’ in the Pronunciation Book videos include ‘ordinary’ names like Trish, Anna, and Jackie, and odd ones like Ptolemy, Lasso, and Glyph. This could speak of the diversity of character options beyond the old familiar ‘space marine’ of shooters. 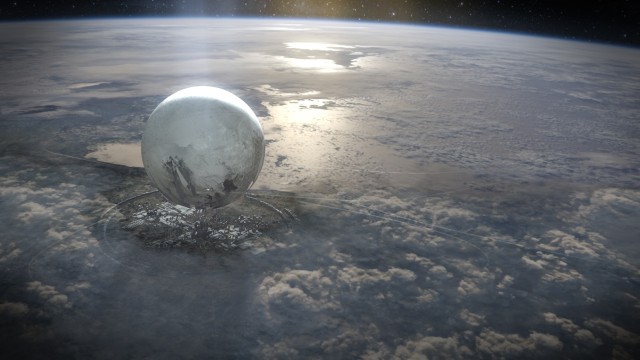 The City: “The city actually has fifty districts, not forty,” and Day 73’s “Tension between the districts has spiked in the last few months.” Destiny is centered around the last city on Earth, protected by a celestial body known as the Traveler. A few of the messages reference markets that are just as unstable as the districts, which makes sense in a city pushed to the brink and surrounded by the unknown. “I’ll tell you where it is if you promise to leave this city. What is the one object you want most in the world?” Is someone hunting for something valuable out there?

Day 71: “They’re singing a new song in the streets of the zone.” This could refer to more unrest in the City.

“Say bye-bye to the city you that love.” The player characters will have to leave the City and journey around the world.

“Living things can change their forms. We now know that life can exist almost anywhere.” Destiny is about the survivors of a catastrophe that ended their golden age venturing forth into the world once more and encountering alien life; this could refer to the heroes or what they find. Or could that be a reference to Halo‘s nearly-unstoppable, ever-adaptable Flood?

The Numbers: Aside from the countdown and its 77 days, we have “Our anniversary is April 14th.” At face value, it’s referring to the fact that the YouTube channel was launched on April 14th, 2010, but what else does it mean? April 14th = 414. 414 minus Bungie’s famous 343 (7 cubed) equals 71. A seven for Bungie, and a one for the Xbox One, the new version of the console most associated with Halo, Bungie’s most well-known series. Then, “Something terrible happened on May 10th.” 510 minus 343 gets us 167… which evokes Bungie’s one-and-six septagon. A terrible event that humbled humanity is at the heart of Destiny‘s backstory.

The countdown ends on September 24th or 25th, depending on your time zone. It doesn’t tell us what the ‘something’ that’s going to happen will be, whether it’s good or bad. Destiny is expected next year, but at some point it was targeted for 2013, and the channel was made three years ago, before that could have been anticipated. But wait, there’s one more calculation to consider. Destiny is planned as part of a 10-year multi-game publishing deal between Bungie and Activision. If Bungie used 343, seven cubed, for the Halo series, then Destiny should use 2,401, seven to the fourth power. The full run of the Pronunciation Book channel at the end of the countdown is 1,259 or 1,260 days. And do the math if you don’t believe me, because 2,401 + 1,260 = 3,661, and 3,661 days is almost exactly 10 years. It all adds up, literally. Bungie is making a mission statement for Destiny.

Of course, I could be wrong. Maybe I’ve gone overboard, and I spent all night pinning strings to newspaper clippings on a cork-board and urinating into a jar for nothing. Or maybe I’m close but not close enough, and it’s pointing to a different Bungie project, like their long-awaited magnum opus Pimps At Sea. Whatever it is, it’s just my kind of weirdness. I’ll be watching, because the world needs to know the answer, and the end of the countdown can’t come soon enough.