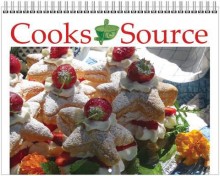 When a writer named Monica Gaudio discovered through a friend that an article she had written on her copyrighted website about recipes for modern early apple pies was published without her permission or knowledge in a cooking magazine called Cooks Source — in print — she was understandably miffed.

When Gaudio got in touch with the editor of the magazine, she asked that they apologize to her in print and on Facebook and make a small donation to the Columbia School of Journalism.

Instead, she received a half-apology and the suggestion that if anything, she should have paid the magazine for editing her article (“now it will work well for your portfolio”). Why? Because according to the editor of Cooks Source, “the web is considered ‘public domain’ and you should be happy we just didn’t ‘lift’ your whole article and put someone else’s name on it!”

Update: Some Facebook users have unearthed more plagiarism in Cooks Source: Their recipe for “Pancetta and Green Onion Tart” was apparently lifted directly from the website of The Food Network, which would presumably have a problem with being considered “public domain.” (via @neilhimself)

But honestly Monica, the web is considered “public domain” and you should be happy we just didn’t “lift” your whole article and put someone else’s name on it! It happens a lot, clearly more than you are aware of, especially on college campuses, and the workplace. If you took offence and are unhappy, I am sorry, but you as a professional should know that the article we used written by you was in very bad need of editing, and is much better now than was originally. Now it will work well for your portfolio. For that reason, I have a bit of a difficult time with your requests for monetary gain, albeit for such a fine (and very wealthy!) institution. We put some time into rewrites, you should compensate me! I never charge young writers for advice or rewriting poorly written pieces, and have many who write for me… ALWAYS for free!”

As many have pointed out, by this logic, everything published on Cooks Source‘s website is fair game for anyone to publish for profit, anywhere. Granted, Cooks Source, which sounds like a pretty crummy publication in light of this, isn’t reflective of the broader world of publications, but this anecdote gives the lie to the cliche about the dead-tree editorial world being a besieged bastion of integrity and the online world being a wretched hive of scum and villainy.

If there’s one silver lining to this whole strange tale, it’s that the medieval art of apple pie preparation as recounted by Gaudio has been rediscovered.