No Surprise, Kellyanne Conway Defines Feminism as “Pro-Abortion” and “Anti-Male” 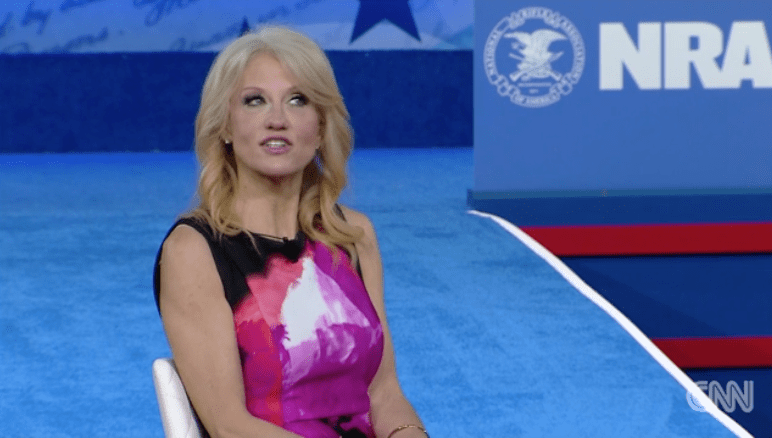 Kellyanne Conway spoke at the Conservative Political Action Conference Thursday, so prepare yourselves for a whole boatload of WTF quotes.

First, credit where a tiny bit of credit is due: She actually tells a nice story about her first ever public speaking appearance and how when she was asked for her speaker’s fee, she didn’t know what to say. So she “took a line out of When Harry Met Sally” and told the booker “I’ll have what he’s having,” meaning her more experienced male co-speaker. Conway potentially ruins this story, though, by ending it with an insufferably solipsistic platitude.

So when in doubt, just say “I’ll have what he’s having, and indeed you’ll get it.”

Oh, good to know it’s as simple as asking and then you’ll always get the treatment and respect you deserve! Thanks, Kellyanne!

Anyway, the real eye rolls come when Conway describes how she sees feminism. Brace yourselves for some stunning misinformation.

It’s difficult for me to call myself a feminist in the classic sense because it seems to be very anti-male and it certainly is very pro-abortion in this context. And I’m neither anti-male nor pro-abortion. I look at myself as a product of my choices rather than a victim of my circumstances, and that’s really, to me, what conservative feminism, if you will, is all about.

Oh wow, where to start?

Thank you, Kellyanne Conway, for pretty much defining what feminism isn’t.

The idea the feminism is “anti-male” is one of the most pervasive (and ludicrous) beliefs held by the opposition. It serves to support the type of success Conway touts–based on the idea that a woman can succeed in business, but not if she’s going to insist on reminding everyone that she’s a woman. This angle supposes that women identify as feminists as a crutch, as a “victim card” they can play to demand special treatment. It also presumes that the end goal for all women craving equality is equal dollars, fame, or professional growth.

Conway, like so many others, views feminism through the lens of her own specific life choices and circumstances (i.e. “I got $3,500 for a speaking engagement and you can too!“). If any woman, or really, any person, has other values or other experiences, those are branded inconsequential and they’re a “victim of circumstances” and just looking for a handout Conway never got or needed. And therefore, if we criticize Conway’s narrow-minded, privileged view, it must mean we have a problem with her personally, rather than a problem with the system she’s defending. If you refuse to believe in systemic injustices, it puts you at the center of everyone else’s story. Which, in Conway’s mind, means that what we really have a problem with is her success.

One thing that’s been a little bit disappointing and revealing — and that I hope will get better — is it turns out a lot of women just have a problem with women in power. You know this whole sisterhood, this whole let’s go march for women’s rights, just constantly talking about what women look like or what they wear, or making fun of their choices or presuming that they’re not as powerful as the men around, this presumptive negativity about women in power is very unfortunate.

I’m not sure how the Women’s March, fashion criticism, and a presumed inferiority are connected, except that it’s very easy to connect anything you want when you refuse to view women as anything but a man-hating, victim-playing monolith.

(via THR, image via screengrab)