Comic-Con Interviews: The Cast & Creators of The Boxtrolls “Couldn’t Make Film Another Way” 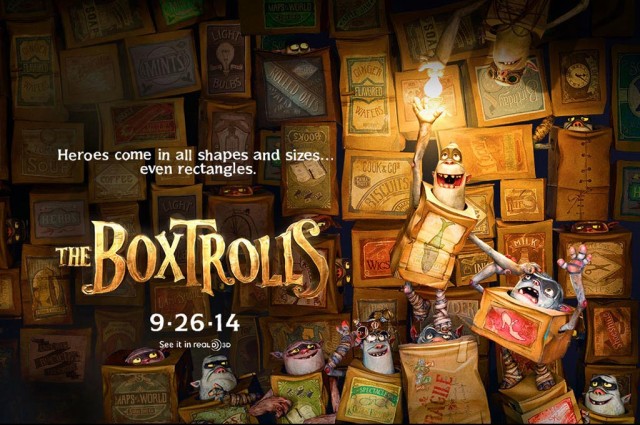 In the CG-ridden world of modern animation, solid old-fashioned stop motion – with a contemporary twist or two- is having something of a Renaissance. Nowhere is that more evident than at LAIKA, the company behind the critically acclaimed features Coraline and Paranorman. Fusing a love of traditional process with technological innovation, CEO Travis Knight, who also serves as lead animator, is shaping his company into a permanent fixture in a computer-generated crowd. The fruit of this experimental approach is the latest LAIKA film, The Boxtrolls, coming to theaters September 26th, 2014.

Based on the book “Here Be Monsters,” by Alan Snow, The Boxtrolls is the story of a young, abandoned boy, named Eggs (Isaac Hempstead-Wright [Editor’s Note: check out our solo interview with the actor here!]), who is taken in by the loving, inventive Boxtrolls who live under the English town of Cheesebridge. But when the benign Boxtrolls’ existence is threatened by an evil exterminator named Snatcher (Sir Ben Kingsley), it’s up to Eggs and feisty towngirl Winnie (Elle Fanning) to save his adopted family.

At San Diego Comic-Con, we caught up with Knight, directors Anthony Stacchi and Graham Annable, and stars Fanning, Hempstead-Wright, and Kingsley in a roundtable interview session to talk about the surprising and inventive process behind such an unusual film. All spoke enthusiastically about their roles in the production, and were especially keen to note the film’s unique style and approach.

In opposition to more naturalistic effects of the studio’s prior pictures, The Boxtrolls represents a stylistic departure into what Knight and Stacchi dubbed Impressionistic territory. We asked them how technological advances had assisted in pushing the look of the film.

“In the infancy of the technology,” said Knight, “[The 3D printing process known as rapid prototyping] could only print in black and white, and shades of grey, it was kind of this pewter color. So it limited what we could do with the design. On Paranorman, we brought color printing into the mix, which allowed us to give more naturalistic shades to the face, and…the way the material absorbed light, looked more like skin. For The Boxtrolls we had a different idea, we wanted to bring a level of stylization to the design. So you have these strange opposing colors all over the faces of these characters, it looks like an Impressionistic painting, really. We incorporated all that into the props, the set, design, the faces. On a still, looking at it, it looks really weird. But when it moves it…” “Looks like a Lucien Freud or Egon Schiele painting,” chimed in Stacchi.

For the setting, the directors created a style they called “Miyazaki Europe. It has a little bit of this country and of that country, the American version of Europe, a mish mash, it’s its own place.” They went on to cite artist Michel Breton, as well as the location of Bruges, as dominant influences on the look of the fictional town of Cheesebridge.

The process of stop-motion animation, which has changed little fundamentally in the last 100 years or so, presents innate challenges, even with the assistance of new technologies. Animation focuses brings to life objects, dolls, drawings, even computer-generated models, things that require a performance given by an animator to give them the illusion of being alive and real, and the difficulties that presents don’t change with medium. As Knight put it, “The thing is, though, things that some people think are not challenging are, in fact, very challenging. The big spectacle, the action, is really hard to do. On the other side of it, subtle, intimate stuff between characters, where you feel like they’re alive, doing subtle human gestures, naturalistic gestures…that stuff’s just as hard. To make them feel alive, and not like they’re just these little dolls, which is what they are. The way these things have life is by somebody bringing them to life. They have to feel relatable, they have to feel like real, living things, so getting that kind of subtlety, little eye adjustments, weight shifts, breathing, all that stuff is incredibly difficult to do, and I think people don’t recognize it’s incredibly difficult to do.” 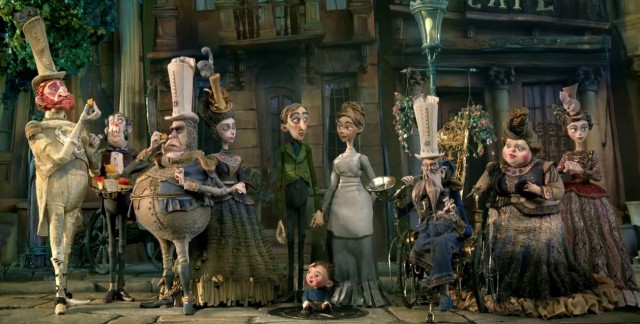 Character animation isn’t the only area where LAIKA is stumping for new ideas. We asked Knight about the company’s continued LGBT representation in films like Paranorman and the infamous teaser trailer for The Boxtrolls. His response was an encouraging one.

“Recognizing that in certain sectors of the world that is a provocative issue, I think for us it isn’t. It’s just kind of a core part of who we are. We don’t want to make an issue of it, and I think we do that by not making an issue of it,” Knight told us. “I think it was important for us on Boxtrolls, the very first thing for our teaser trailer was it got to the thematic core of what the movie was about, connections between parents, between children and their families. We saw an opportunity to say something meaningful about what the film stood for and also, collectively, as a company, as a group, what matters to us.”

Animation, particularly for a narrative feature, relies on voices as much as on animators to bring characters to life. Though actors often see design work or models of their characters, they are recording prior to shooting, and so have no idea what their character will ultimately move like. This collaboration, invisible to the actors initially, can deliver surprising outcomes in the film’s final form. As Sir Ben Kingsley told reporters, “I haven’t seen the whole film, but I have seen little bits of my animation that the guys sent me when it was completed. There are some gestures that exactly mirror what I was trying to do with my voice. It’s an absolute delight. His walk, his body language, it’s very exciting to watch that, because it’s not me.”

When asked by us about the nature of this invisible collaboration, Knight responded, “It is a collaboration between animator and voice actor, between the performance and the recording. Obviously, the voice actor will have no idea that it is a collaboration, but it is…They are both actors…[Animators are] bringing all that same stuff that an actor would bring to a performance, to an animated  performance. So it’s your imagination, your experiences, observation, and then listening to this voice over and over again, and how that fits into the things that are important to the scene.”

Like her previous experience on the effects-heavy Maleficent, Fanning commented that, as an actor, “You have to give yourself over to [the filmmakers] and really trust them. Because with this, I didn’t watch my character, I didn’t watch Winnie and the Boxtrolls performing. I was just talking. So I had to really trust Travis and Tony and Graham to match up my voice correctly.”

The actors, in response to this challenge, found different ways to physically approach the voice work. Kingsley reclined, lying back for the entirety of his performance, so that his voice might come from a fully relaxed body. Fanning, meanwhile, took off her shoes to do her takes, and recommends that everyone try the same. “I’m so used to people seeing my body, and a lot in my face and eyes, you can tell a lot through that, with this you so can’t. In the beginning I was so still, and we had to find her voice. I was a little more in film mode, I was talking quietly, and showing emotion in my face, and they said ‘you have to do it in your voice.’ So I took my shoes off- always go barefoot- and once I kind of amped it up a bit, I would puff my chest up a bit, because she was a spoiled girl.” 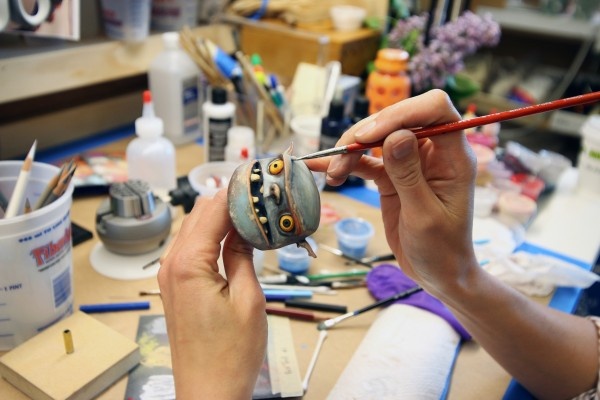 When asked by another journalist why stick to such a difficult artform, Knight was quick to emphasize the rewards of the process, as well as the devotion stop-motion animators have for their craft. “I think that the artist is inextricable from the art. I think that the process that an artist goes through to make the art, you can’t separate those things. You get a point of view and perspective from people who make things by hand, a kind of passion that comes out the other end. They couldn’t make film another way, that’s the only way we can make a film. So, it’s like asking a great painter become a great photographer. Those are two different things. This is what we do, this is what we love, …and at the core, it is for people who love this medium and want to take it into a new era. It has a quality that isn’t like anything else.”

The animators embrace technology, Knight comments, but the process itself is “Un-speed-upable. For every way it speeds up the process, it slows something else down. If you can do more, your ambition gets bigger and more expansive, and if you’re trying to do more, [it] slows it all down. It takes whatever it takes. It’s a testament to the group of people that everyone loves the medium so much, that they just want to push it, to take it to a place that it’s never been before.”

From such painstaking efforts comes an effect that cannot be achieved through computers, a magical, hand-hewn look that speaks to the hard work of individuals who are committed to their work. With so much progress at hand, both technological and traditional, and so much love for the method involved, The Boxtrolls will doubtlessly be a feature to look out for.