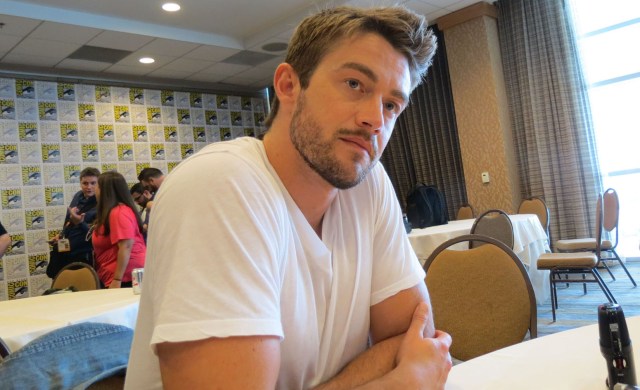 As a fan of the Chris Roberson and Mike Allred comic series, I’m very much looking forward to The CW’s iZombie adaptation, even if it strays from the source material. But during interview sessions at San Diego Comic-Con, I was surprised to find out star Robert Buckley, who plays Major Lilywhite, is a comic book reader as well.

We initially asked the obvious question – has Buckley read the comic the TV show is based on?

“I was aware of the title, I had never read it prior but I was aware of the property,” he told the group of journalists. “But when the project came around, the day I was supposed to have a phone call with Rob Thomas, I quickly ran to the comic shop and bought the first two volumes of the graphic novel. Actually, before my first audition I went and grabbed ‘em to quickly skim it for scenes of Major. He’s not in the books though, so it’s like, well fun! I get a blank canvas here.”

But unlike most actors in comic book movie or television roles, Buckley does read comics normally.

“I read comics. I’m an adult so I call them graphic novels now to save face,” he told The Mary Sue, to which we quickly responded by saying he absolutely should not be ashamed, especially considering we were sitting at Comic-Con. “To this table I can say comics but in the outside I’ll be like, ‘I gotta pick up some graphic novels for work.'”

Considering his iZombie character is not in the original comic, another journalist wondered where he pulled his inspiration for the role from.

“The one thing that was really tough about that was that as a fan of comics, I’ve just been dying to be a part of a comic book, and there was this part of me that was like, ‘Agh! I’m still in the DC family but I’m not, like, Aquaman.’ So that was a bummer,” he told the table. “They did a great job in this pilot. Every character had their own voice… He ‘s very on the page. And also, his role in the pilot is… he’s really there to still try to get Liz back. So there wasn’t, like, ‘oh, I don’t know where he’s coming from,’ because it’s heartache, which is so easy to relate to. And it was funny.”

Of course the question was burning in the back of my mind for the rest of our time with Buckley and I’m glad I got the chance to ask – which comics does he read? Turns out, he’s a big Image Comics fan.

“I love Saga! I love Think Tank. I just read Sex Criminals, which I really liked,” he told The Mary Sue. “Classics I grew up with, generally, grabbed X-Men. I loved it. As I’ve gotten older I really like darker stories, so Daredevil I think is great. Batman’s great. The Pro, I love it. And I recently come into contact with the guy who owns the rights and I was like, ‘Tell me you’re doing something!’ And he was like, ‘we actually are.’ Yes! The world needs to experience The Pro.”