Comic-Con Interviews: The Book of Life Will Bring Mexican Folklore to the Big Screen in a Unique Way 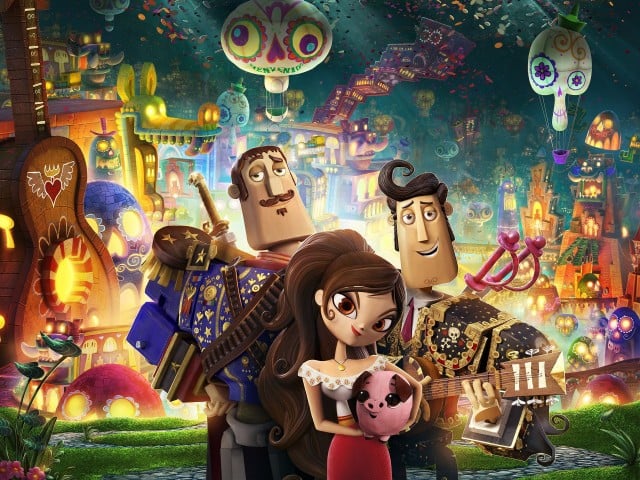 “As a lover of animated films, I kept going, ‘When is the Mexican story going to happen? When is the Mexican princess going to show up?’” queried director Jorge R. Gutierrez before a packed crowd at the San Diego Comic-Con press conference for his new animated feature, The Book of Life. He’s not the only one who’s been wondering when the rich folkloric traditions of Mexico, especially given their relevancy to America’s growing Hispanic population, might be mined by a Hollywood studio. However, as the saying goes, if you want something done right, do it yourself, and so Gutierrez has, thanks to the support of 20th Century Fox, and prolific producer Guillermo del Toro.

The film concerns a wager between two spirits, Xibalba (voiced by Ron Perlman), and La Muerte, (Kate del Castillo) over who will win the fair Maria (Zoe Saldana)’s hand; the noble, sensitive Manolo (Diego Luna), or the charming, confident Joaquin (Channing Tatum). In danger of losing the bet to La Muerte, Xibalba sends a poisonous snake to kill off Manolo. Finding himself trapped in the land of the dead, Manolo must journey across three fantastical worlds in order to return to the living world and win back Maria. Book of Life is CG animation, and boasts of a unique, almost wooden-doll-like look for its characters, as well as thematic elements never before portrayed in American animated film.

Del Toro also spoke to the aims of creating an original film which stays true to its roots while expanding upon them, saying he wanted to protect Gutierrez’s vision from the beginning. To him the film is “about a celebration of Mexico. We can go to its roots, we can go to its essence, but one essence that we wanted to celebrate was the international essence of Mexico. We are Mexicans, and we are shaped by world music, or Bruce Lee movies, or Santo movies, as much as we are by the things that are folkloric. And so we wanted to make the movie eminently modern, but steeped very particularly in our roots and what the Day of the Dead is about, which is celebrating life, celebrating those that came before us.” This mix of modern and traditional influence can be seen in the film’s trailer, which contains more contemporary references and jokes, along with its Day of the Dead setting, bullfighting, and folk music.

To del Toro and Gutierrez, the film’s broad appeal will come from its differences. “In order to be universal, we tried to be very specific to our culture, and who we are, and what we love,” del Toro told reporters. “Not any one of us is trying to cash in on a…CGI movie about talking animals…skateboarding and [speaking] one-liners.” For the producer and director, they wanted to make sure their film stood out in a crowded field of CG animated films. “It’s something fresh, and daring, and beautiful, like the heart of Jorge, which is full of cholesterol and art!” del Toro added, to raucous laughter.

When asked about casting Tatum, Gutierrez commented on the character of Joaquin, who he says had to be like “a high school quarterback, super iconic…charming, over-the-top guy.” Thinking Tatum would say no, initially, Gutierrez pitched to him “you’re going to be Captain Latin America. You’re going to have the mustache of Mexico, the suaveness of Brazil, etc.” and was surprised to find Tatum was more than up for it. Though one wonders why Gutierrez did not take the opportunity to have an entirely Latin American or Mexican cast, it seems the director was pleased to have what he felt was the right actor for the right part.

The cast, for their part, were asked about the challenges inherent in doing voice-over work, which is often recorded prior to animation being completed, or done at all. Christina Applegate, who plays ­­­­Mary Beth, said she liked voice over because it doesn’t require you to put on makeup, or even shower. But, aside from the more practical concerns, she also said “you’re kind of doing this blind, you’re having to imagine this person in your mind and the way they move, the way they carry themselves, the way their mouth moves, because you haven’t seen any of it. Then when you finally get to go in a few months later, doing some more dialogue, you get to see it come to life, and it’s quite a magical moment, and it’s really, really cool.”

Castmate Perlman was similarly enthusiastic about voice work, saying “you’re always working on an incredibly instinctive level, there’s not a lot of analysis going on, you’re going for the brass ring immediately…it’s kind of like pure performing, for performing’s sake.” Channing also liked the immediacy and improvisational structure of voice-over work, as well as the comfort it offers under the right director. “It’s like working with a net, where you physically can’t do anything wrong,” he said.

In conclusion, speaking with great excitement and, with an emphasis on death positivity, Perlman described the film as, “dazzling…and I’m going to explain what I mean. When I did my first movie with Guillermo in 1991, was when I was introduced to the concept of the Day of the Dead. What I took away from it, of the myriad of things that you can take away from when someone first describes to you why there is a Day of the Dead, and why there is a culture that has invented this…ritual, and how charming it is, this myriad of things, for me it was like, we live in a culture here where death is an enemy, it’s feared, it’s something you run from, and this was this beautiful relationship of the living to the dead, where you make friends with it, you understand it, and it’s just part of this continuum. You de-mystify if and celebrate it in a way that brings beauty to it. To be able to be part of a film that’s going to introduce that to little kids, you know, in America, who would never be introduced to it otherwise, that’s dazzling.”

Book of Life sounds like it’s not going to look, or be like, anything that’s quite been seen before, and well worth a chance from fans of animation and culture alike.

Previously in Book of Life