What do you get when you add together Steampunk, a detective story, smelly cheese, and a heartwarming tale about unconventional families? Apparently, if you’re Laika Studios, you get The BoxTrolls.

The trailer for this promising, adorable film (from the people who made Coraline and Paranorman, no less) just came out, and it looks awesome. The poster has arrived, too! 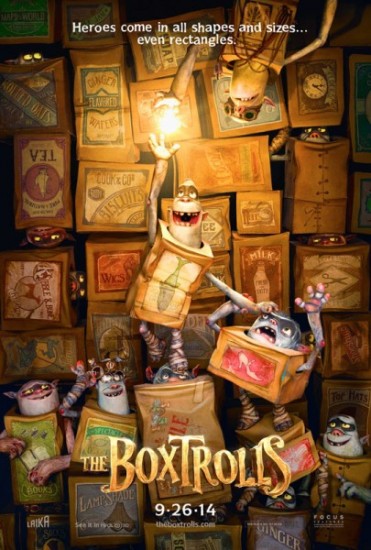 We’ve written about this movie before, but the official synopsis looks like this:

The new 3D animated feature from Laika Studios tells the tale of the Boxtrolls, monsters who live underneath the charming streets of Cheesebridge, who crawl out of the sewers at night to steal what the townspeople hold most dear: their children and their cheeses. At least, that’s the legend the townspeople have always believed. In truth, the Boxtrolls are a community of lovable oddballs who are raising as one of their own an abandoned and orphaned human boy named Eggs. When the Boxtrolls are targeted by a villainous exterminator who is bent on eradicating them, Eggs must venture aboveground to save them, where he teams with an adventurous young girl to save not only the Boxtrolls but the soul of Cheesebridge.

Check out the trailer, and if it doesn’t make you excited, you might have a medical emergency on your hands because I think your heart is missing.