Comic-Con Interviews: Game of Thrones’ Isaac Hempstead-Wright Talks to Us About The Boxtrolls 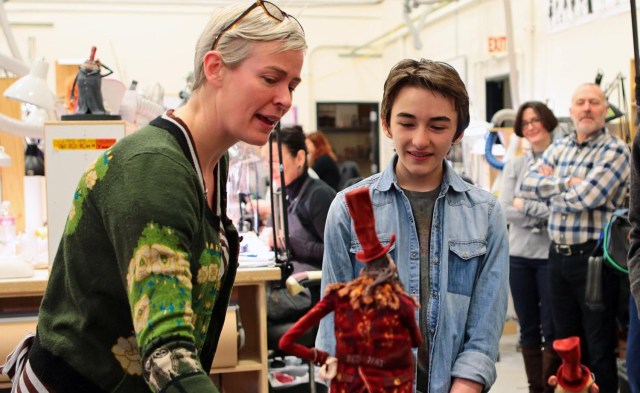 Isaac Hempstead-Wright has a lot to say about the wonders of animation, especially when it comes to his latest project, LAIKA’s The Boxtrolls. Best known for playing Bran Stark on HBO’s megahit Game of Thrones, the young actor is now lending his vocal talents to the characters Eggs, a boy raised by the benign trash-collecting troll clan that live under the fictional Victorian town of Cheesebridge. We caught up with Hempstead-Wright at San Diego Comic Con 2014, where he was promoting the film with co-stars Elle Fanning and Ben Kingsley, to ask him about visiting the elaborate sets, how crazy animators really are, and what it’s like to give voice to a physical performance you can’t see.

TMS: What has it been like coming off something that is as big and widely known as Game of Thrones, to being on this sort of project?

Isaac Hempstead-Wright: Animation is sort of untouched territory for me. I’ve never done anything like it before so it’s been a really fun process. It’s been completely different from anything I’ve done before but I’ve enjoyed being a part of it, and being part of LAIKA’s universe is a real privilege.

TMS: What attracted you to this project? You said you’d never done animation before. Was it the script, or the design or…?

IHW: Just being a part of LAIKA’s world, really. I’d seen their previous movies and I’d thought a lot of work went into it, but the amount of work I thought went into it is the tiniest, one-billionth amount that really goes into it. So to be a part of these really, really incredibly talented people’s work is a dream come true.

TMS: You had mentioned previously you got a chance to visit the set, see some of the animator’s departments. Can you talk a little bit about what that was like?

IHW: It was incredible. It really was like I’d gotten a golden ticket to Willy Wonka’s Chocolate Factory. Because it’s this fairly unassuming industrial building in Portland, and you walk in and there’s some offices, and then the costume department, and there’s an entire universe contained within. Everything there is done perfectly. It’s not like they let up on any single detail, everything you see is real. The mecha drill; it works. The cogs…I was there the other day and I turned them and it turned stuff, it makes things move. The water is carefully done, it’s done in a really innovative way where they spin this special panel around and shine lights on it so it looks like water is moving.

Then there’s the armatures department who come up with these really inventive ways of controlling the puppets, and they have to engineer each joint to move perfectly, and in the right way, and not too stiff, not too soft. Then there’s the set people who, all the way from the initial drawings, come up with the ways they’ll do it, and then keep sawing off bits of the set so they can come up with closer animation bits. There’s the animation itself which relies on this 3D printer which prints every single different face they have, and they put them on and off each character so they get the illusion of them moving and talking. It’s just such a laborious process! I think Travis [Knight, LAIKA’s CEO and lead animator] said, it’s the stupidest way to make a film, and it’s painstaking, and it takes so long and is so difficult, but is so rewarding when you see it.

TMS: So when you came on to the project, did they show you art, did you have some idea of what you character looked like?

IHW: Yeah, I did. They showed me some of the character art, and I actually got to see a little model of it. It had an uncanny resemblance to me, actually! 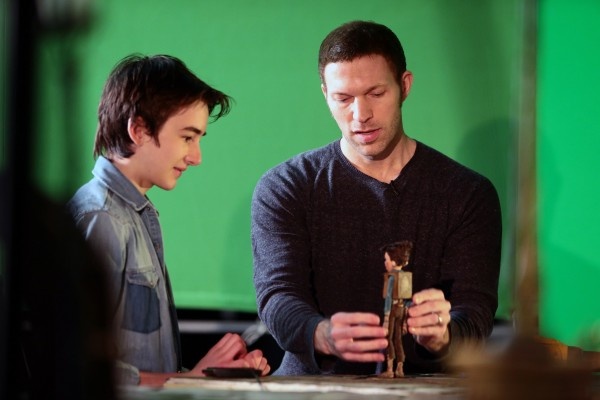 TMS: You know, in animation…I’m an animator, actually-

IHW: Fantastic! My favorite film of all time is actually The Illusionist.

TMS: I was going to ask you what your favorite animated film is! That’s an incredible film, isn’t it?

IHW:  Everything in it is all sort of drawn out wonderfully. The story is slow, and nothing really happens, but everything happens at the same time.

TMS: Sylvain Chomet’s work is some of my favorite. I mean, if you want to talk about painstaking work!

IHW: So you have to re-draw each character on each scene. Oh my gosh! That’s almost even more painstaking!

TMS: Well, I think stop-motion, making all the different puppets is quite a lot of work!

IHW: I guess…but you have to make sure you draw it perfectly.

TMS: Yes, but, you know, we get more than one take. They have to do their performance all in one take.

IHW: Yes, my performance is actually a very small part of the actual thing. All you’re doing is providing a little bit of life to the character. The character’s already got their life. The real actors are the animators, and the directors who are saying right, we want to see them move like this, and then do that, and the people in the art department, you know, we want them to look like this because that demonstrates this. Or the costume department, they’ll say we want a great costume like this that moves like this and creates the idea of this. You realize you’re just a small part of the jigsaw puzzle that creates the whole pictures.

IHW:  I think there are way more important parts than the voice in this. The character is crucial to this. Frankly, you could tell a story without the voice, and I don’t know if you can tell a story as vividly and well with just the voice.

TMS: Have you see the final film? What did you think?

IHW: I have. It’s completely mad, and it’s really kooky, and crazy, and fun. I think everyone will really enjoy it.

TMS: Our readers would kill me if I didn’t ask you a couple of Game of Thrones questions…I wanted to ask if, in the tale of a disabled person in an essentially medieval-like society, have the producers or directors approached you about anything to do with movement study, or with bulking up your top because that’s what might happen, or is it really just not considered?

IHW: No, not at all. I didn’t really think about that sort of thing too much. It really is just like acting while sitting down, it isn’t a big challenge or something different to acting. It’s just acting really, and a slightly different way of moving. It doesn’t stop you from expressing anything. Most of the stuff is done in the top body, and just being paralyzed doesn’t affect that in any way at all.

TMS: What is it like to be part of a huge cultural phenomenon like Game of Thrones? I mean, Comic-Con, it must seem like you’re all over the place.

IHW: It’s been crazy! It’s fun, and I have to pinch myself every time I realize how big it is now.

TMS: Moving on into the future, perhaps to other projects, what draws you to take on certain things? We were talking earlier about the fantasy aspect to these projects, is that something that continues to interest you?

IHW: I just kind of do whatever happens, really, I go along, ride the wave.

Previously in The Boxtrolls