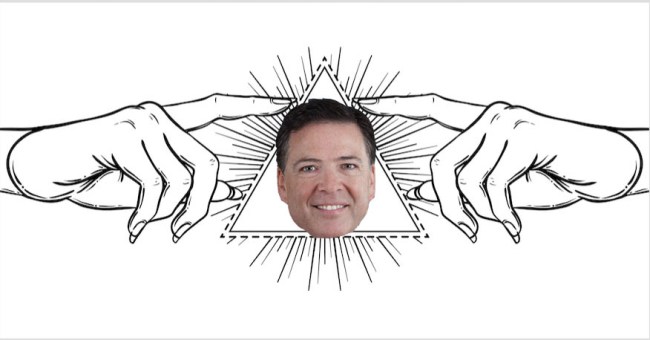 We all know Donald Trump hates leaks. He hates leaks as much as he loves slinging threats and insults on Twitter. He got to combine the two when he tweeted out this odd threat to former FBI director James Comey, days after his firing.

James Comey better hope that there are no “tapes” of our conversations before he starts leaking to the press!

Trump is clearly used to being able to make barely veiled threats to whomever he wants, as publicly as he wants. He’s been doing it for years on Twitter. It’s his blue-ribbon hobby. The thing is, he’s not a private citizen anymore, and alluding to the existence of taped conversations with the “President”—hey, if he can use arbitrary scare quotes, so can we—is a GIANT DEAL. A Nixon-level deal.

On top of the whole secret recording thing is the fact that he’s now using the possibility of those tapes to threaten the former head of the FBI, now a private citizen, to intimidate him into not talking to the press and, presumably, as he tried with Sally Yates, not testifying before the Senate panel next week.

And sure, we all know he’ll say he doesn’t have any knowledge of tapes, he just, I dunno, gee, really hopes there aren’t any. You know, for Comey’s sake. Or maybe he’ll make Sean Spicer use the old quotes = jokes defense again.

(Spicer, by the way, looked like he was going to sweat through his suit jacket with all the cardio-level deflecting he had to do at today’s White House press briefing. What are the odds Trump tweeted that just to punish Spicer on his first day back after a week of hiding in bushes?)

(*I think he meant speaks but I don’t want to make assumptions.)

But in the meantime, given that whole being the President thing, Trump’s threats, empty or not, carry a ton more weight now than they did when he was just tweeting about the love lives of Twilight stars or whatever.

And his colleagues are here to remind him of that.

That’s an official request for those tapes and any information on any sort of recording system being used in the Oval Office or the Residence, courtesy of Congressman Raja Krishnamoorthi.

See, Don, when you’re just some millionaire and you tweet a threat about having bugged your own office or home, so that when you invite your coworker over for dinner and reportedly try to force him to pledge his loyalty to you, everyone just thinks your an asshole.

When you’re the President and you do that, that’s a big ol’ Nixonian threat to national security. So yeah, people are going to want to hear those tapes.

They’re also going to want you to stop tweeting this nonsense. Whether it’s true or not, just stop doing this. Literally everyone you know is super embarrassed by you.