Mellow Out With This Amazing Footage Of Northern Lights, Pan-STARRS Comet [Video] 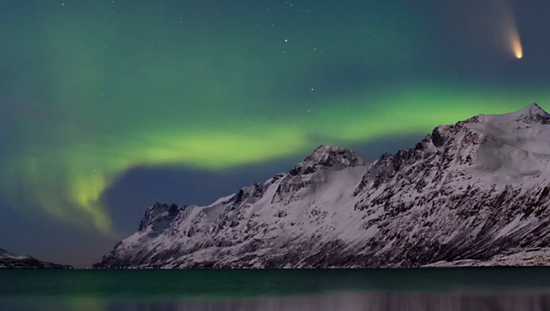 Last month, we talked about how “baby comet” C/2011 L4 was set to buzz the Earth. It was going to be visible to the naked eye, if you knew where to look and had clear skies. And Pan-STARRS didn’t disappoint. It may have been young, but comet C/2011 L4 timed its flyby with northern lights in the skies of Norway earlier this month, and the result is the kind of show we don’t get too often.

The footage was captured by astronomer/photographer Babak Tafreshi by a fjord near Tromso, Norway. Comet and aurora aside, it’s a breathtaking wintry view. He could have filmed a piece of paper blowing in the wind there and it would still look amazing.

Still, this was a comet, even if it’s no Halley’s Comet as far as brightness. Comet C/2011 L4, discovered in Maui back in June of 2011, has a young photometric age, meaning it’s not exactly an ancient of storied celestial object. But when a piece of the Oort cloud from the edge of our Solar System comes flying past our atmosphere to herald a display of energized atoms as they meet waves of magnetic force…well, the outcome was sure to be spectacular: