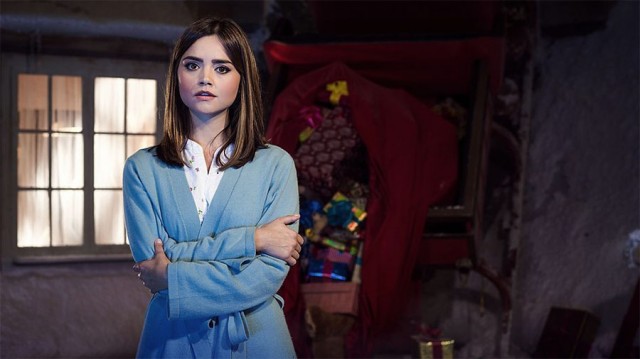 If you watched Doctor Who’s 214 Christmas special, you already know the answer to the looming question – Is Jenna Coleman returning for Season 9? But now you can hear what she and showrunner Steven Moffat had to say about it.

When the initial rumors of Coleman’s departure revealed themselves, the actress was of course cagey in her answers on the topic, saying it would ruin the surprise if she confirmed or denied. “If you know I’m in the series—or you know I’m off—you’ll know how the story ends,” she said, “It’s much better that nobody knows which way it’s going to go.”

A month out and the actress was still not confirmed for next season, although Peter Capaldi was, and later that month the BBC confirmed we’d have our answer in the Christmas special. And sure enough we did. The episode not only left us with the Doctor and Clara running off for their “second chance” but a message which read “Peter Capaldi and Jenna Coleman will return in ‘The Magician’s Apprentice.'”

The Radio Times sat in on a press event for the episode in which Moffat had this to say:

“Jenna is in all of the next series, which we’re delighted to reveal,” before explaining that Coleman had kept him hanging on just like everyone else.

“There was a certain amount of to-ing and fro-ing, wasn’t there Jenna?” Moffat asked his star at the post-screening Q&A. “I always think I’m quite good at winding up people on this but Jenna completely outplayed me when she said in an interview ‘I’m not telling you if I’m staying or going because it’s just more exciting.’ And it occurred to us all that we don’t start shooting until January so we could actually keep it a secret.”

I can’t help but be amused by Moffat’s reaction to Coleman’s answer. Actually telling reporters you can’t answer because you don’t want to spoil a plot point is exactly the kind of thing creators and actors should be doing when asked to reveal too much. And it’s certainly preferred to lying, at least in this fan’s mind.

But of course Moffat’s response here also reveals something I was guessing: that Coleman really wasn’t sure she’d be down for more Doctor Who. However, the Radio Times says Coleman mentioned her chemistry with Capaldi as one of the reasons she stayed. “It’s wonderful – a whole other series of stories with the Doctor. I couldn’t walk away with the story being unresolved, there’s so much more to do and I think [Clara and the Doctor] have finally just reached a point where they really understand each other.”

And to that Capaldi said, “I was so excited and delighted when she finally [agreed to stay].”

So, are you happy Coleman is sticking around for more adventures?