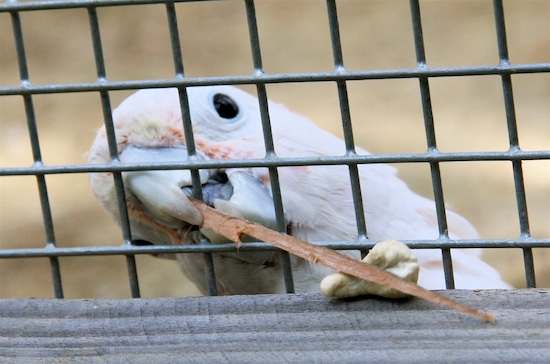 This is Figaro, a Goffin’s cockatoo, using a tool he made himself to reach a delicious cashew placed just out of his reach. While more and more birds — like crows — are understood to use simple tools, Goffin’s cockatoos have never been seen using tools in the wild before, meaning this is the first example of Figaro’s species ever using tools — much less crafting tools themselves without prompting.

Figaro was born and raised in captivity at the University of Vienna, and his tool building shows that choosing him as a research subject really paid off. He came on his fame to researchers when they saw him playing with a pebble on the outside of his cage, using a small stick. Since his species have never been noted as tool-users before, researchers curiosity was piqued, and they decided to put his skills to the test. Boy, were they not disappointed.

When researchers sweetened the pot with the promise of a cashew, Figaro didn’t just use any old stick to retrieve it. Instead, he bit a splinter of larch wood off of his enclosure, then chewed it down to the right size for the job, and bringing the bacon — or in this case, nut — home. That marked just the first of several items Figaro crafted and then used to reel in out of reach foodstuffs.

Figaro is currently the only cockatoo, or parrot of any sort, thought to use this tool-making technique, but the fact that he did demonstrates that members of his species are just one step — albeit a fairly big one — away from being tool users. The research, published in the journal Current Biology,  gives evolutionary scientists a new track to explore when they’re looking for the biggest bird brains, and proves once more that making tools is not — and maybe never has been — solely the province of us primates.